Internet users in Alaska who are low income or who lost wages during the pandemic are eligible for an internet subsidy of up to $75 per month under a new federal program.

A household is eligible if someone qualifies for the Lifeline program, receives assistance such as free and reduced-price school lunches or a Pell Grant, or experienced a substantial loss of income due to pandemic. Households that make less than 135% of the federal poverty designation and those living on tribal lands or have household members participating in certain tribal programs are also eligible.

Additional eligibility information can be found on the program’s website. The program is set up to give eligible households a $50 per month discount but some Alaskans could get $75.

“I think that’s one important thing for Alaska listeners to know, the benefit is up to $75 a month for those households as opposed to the $50 a month discount,” said Ed Bartholme, the Deputy Chief of the Federal Communications Commission’s Consumer & Governmental Affairs Bureau.

“There’s a variety of service types that are included in the program — there’s fixed wireless, there’s wired for homes that have wired connectivity as an option, there is mobile which is much more akin to cellphone service,” Bartholme said.

The money came out of the huge Consolidated Appropriations Act passed by Congress in December. One aspect was focused on how much families relied on internet connectivity while staying apart from others to prevent from spreading disease.

Bartholme said it took a while to stand up the program, but it was record time for his agency.

“Congress instructed the FCC to stand up a completely new program that is critically important, critically timely to the current environment and the current situation, but making it live and real where people can actually start to collect benefits from it,” he said.

It won’t pay fees that are already owed, but discounts start this week.

The pandemic-related program will continue until the $3.2 billion in federal funding runs out or six months after the Department of Health and Human Services declares an end to the pandemic.

The website shows all of the providers participating across the state, including larger providers like GCI, Alaska Communications and MTA. People can search for their zip code or city to see which providers are in their area.

Bartholme says there are consumer protections built into the program.

“One of the big things we wanted to prevent and make sure it didn’t happen, was that people who needed this sort of assistance weren’t stuck with sort of an episode of ‘bill shock’ when the money runs out,” he said. 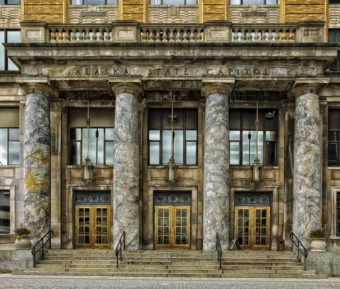 “It concerns me and it frustrates me that I’m seeing a number of cuts targeted toward rural Alaska. I think things are shaping up to be a real showdown here. It’s not going to get any prettier from here on out.”

In another sign of how climate change is transforming the Arctic, a Toronto-based company is planning to lay a fiber-optic cable through Canada’s Northwest Passage.