The beginning of the herring spawn in Sitka Sound signals the wind-down of commercial fishing and the start of the subsistence harvest: the millennia-old tradition of submerging hemlock branches along the shoreline, and waiting for herring to coat them in a thick layer of eggs.

Subsistence harvester and former Tribal Council member Tom Gamble is determined to see this tradition continue — by working to protect herring stocks and teaching kids how to harvest eggs. This spring, he shared some of his knowledge in a herring camp for kids.

“This was their first time seeing what subsistence herring eggs are all about,” Gamble said about his herring campers. “They’re really excited about it, they, they like to eat them, but they’re not really sure how to harvest them.”

Gamble said the camp created a lot of “aha” moments.

“There were a lot of those moments for these kids who had never seen anything like it before,” he said. “Giving them just the mental images for the first time, and being able to manipulate, you know, a branch and a twig and, and the hope that maybe they might get some eggs.”

The camp is an extension of his new business, the Alaska Native Indigenous Training Academy, or ANITA, named after Gamble’s late mother. Over the course of several hours one day in late March, he taught around 10 students and their chaperones the basics of harvesting herring eggs on branches, from the technical to the familial.

“So the very first activity they had to do was to go and find a rock together. And then they had to learn how to tie it together and to communicate what works and what didn’t,” he said. “Because if you’re out there and you’re harvesting, and you’re not talking with your family, then it’s just work. You might as well just get a job and call it work. It’s got to be fun.”

“Helping Tommy set the trap for the herring — it was fun,” said 8-year-old Lukas Schmidt, who participated in the class. “I liked doing it, and I got to learn something new,” he said.

Lukas’s mom Jeren said the camp was an important experience for her kids and her homeschool classroom.

Subsistence is a lifelong practice for Gamble. He is Kiks.ádi from the Clay house and his family uses the Herring Rock as their emblem, signifying strong cultural ties to Sitka herring for thousands of years. His advocacy for herring has become energized by what he’s seen on the water over the last couple of decades.

“As a subsistence harvester, we’re the frontline. We see a lot of changes,” said Gamble. “My involvement if you would, wasn’t chosen, where I wanted to draw a line in the sand and say ‘I want the commercial side to be over here and I want the subsistence guys to be over here,’” he said. “My involvement came because we realized if we didn’t stand up, there were never going to be any changes, and we were going to get run right out of our own way of life.”

The Sitka Tribe of Alaska sued the state in 2018, calling for changes to the management of the commercial fishery. The case is still being litigated but some incremental changes have been made. The state must further document its efforts to show they’re allowing “reasonable opportunity for subsistence.” But Gamble is concerned that the state’s modeling is far from perfect.

“Most recently, the indescribable coming back from a different harvesting trip, I had to stop in the middle of the ocean to watch the herring surface,” Gamble, thinking back on a day in mid-March. “This was on the day that science flew everywhere in the Sound and said that they didn’t see a single herring. So the traditional harvester had the herring come up under me. I’m telling you again that our traditions and our knowledge have proven over time. When we say that the herring are disappearing, that’s what we meant.”

Gamble understands that commercial seiners are just trying to earn a living, but he believes the fleet is too large and should be reduced through a permit buy-back program. And he’d like locals to have a larger role in managing the fishery through a stakeholders committee.

In the meantime, it’s important that the subsistence harvest of herring remains viable in Sitka Sound, so that it can be taught down through the generations. Gamble plans to continue teaching subsistence camps throughout the year. It’s a way to honor his mother, Anita, and a hedge against the day when he is an elder himself and may depend on others for this food.

“When I was growing up I never thought for the life of me that even my own kids would be so busy that I can’t get help harvesting. And I thought ‘Well maybe if I trained a couple of these youngsters around here, I can sit at home and one day they just bring me a deer or a seal,'” Gamble said. “I’m gonna train this next generation how to take care of Elders in their community by just taking care of themselves.”

Editor’s note: This story is part of a series sharing different perspectives on herring. 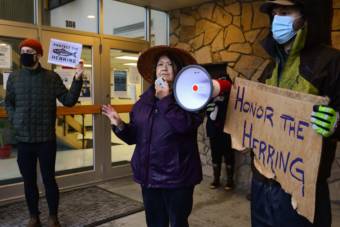 The group advocates for herring and subsistence harvesters, and calls into question the state’s management of the commercial herring fishery. 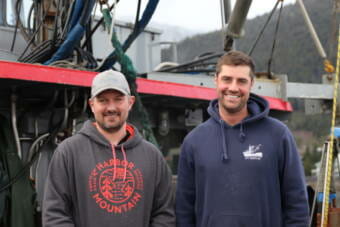 State management of the herring fishery has been the subject of ongoing litigation in the courts for two years now, with the Sitka Tribe arguing that subsistence harvests of herring roe are not being properly addressed.