Alaska Gov. Mike Dunleavy sent a letter to all legislators on Wednesday saying the state should not return to having a disaster declaration. He instead wants the Legislature to pass a more limited bill.

“To reenter a state of disaster without apparent catalyst would irreparably harm the trust Alaskans have placed in us,” he wrote. “Further, it could lead travelers to incorrectly assume that Alaska’s situation is deteriorating, jeopardizing the livelihoods of those working in one of our largest and hardest-hit industries.”

Dunleavy was referring to tourism. In the letter, he said tourism and recreation businesses are gearing up for the summer. He also noted that airline capacity for the state has increased, small cruise ships are operating; and “even our most cautious” municipalities are lightening restrictions.

Hospital leaders opposed ending the disaster declaration, in part because it led to the end of mandatory COVID-19 testing for air passengers. And they have said that not mandating tests for travelers contributes to the spread of the disease in the state.

After the declaration expired, Dunleavy said he no longer wanted to have a disaster declaration. He wants a limited bill that would allow the state to allocate and distribute COVID-19 vaccines; provide limited liability to health officials responding to the pandemic; continue enhanced telemedicine; and authorize the state to receive federal funding, such as $8 million per month in family food aid.

The House could consider a bill as soon as Thursday that would extend the disaster declaration, including making it retroactive to the expiration. 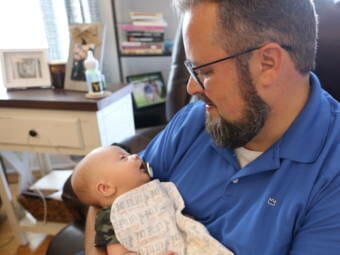 Expecting mothers who get COVID are twice as likely to be admitted to the ICU and have a 70% increased risk of losing their lives.

Biden has said private sector employees who refuse the vaccine can opt for weekly testing instead.

Alaska still ranks as the state with the highest case rate in the nation.