Despite difficulties with getting access to COVID-19 vaccines earlier in the year, roughly 1,800 people in Unalaska were vaccinated at a mass vaccination clinic on Thursday.

The effort was part of a new Biden Administration health center vaccine program that sends COVID-19 vaccines directly to community health centers. Under the federal program, Eastern Aleutian Tribes is working to vaccinate several communities in the Aleutian Islands and Alaska Peninsula regions.

In just one day, hundreds of local residents, kids as young as 16, seafood processors and boat crews all filtered into Unalaska’s high school gym to receive their first dose of the Pfizer vaccine.

Joseph McMillan, a community health practitioner and medical operations manager for EAT, traveled to Unalaska from the 950-person eastern Aleutian community of Sand Point to help distribute the vaccines that were recently allocated to the regional tribal healthcare provider.

“It’s a great opportunity,” McMillan said. “We had the vaccine, so it’s great to be able to share it with our neighbors.”

Unalaska is just one of the communities along the Aleutian Chain not generally served by EAT that they’re sharing the vaccine with. Before coming to the island, McMillan said they stopped in the nearby community of Akutan to administer vaccines there.

And with the help from Iliuliuk Family and Health Services clinic staff — as well as staff from Unalaska’s Department of Parks, Culture and Recreation, the fire department and local volunteers — EAT helped vaccinate an estimated 1,800 people in Unalaska Thursday.

If that sounds like the makings for a long, busy day, that’s because it was.

“We can handle 100, 200 people at a time — kind of weaving through the hallway, in line, staying distanced,” said Dr. Megan Sarnecki, medical director at the IFHS clinic. “And then we vaccinate in these six tents, and then they wait their 15 minutes here — [using] a color code to know who leaves when.”

Sarnecki arrived at the school’s gym first thing Thursday morning, and by about 6 p.m., with help from the community and partner agencies, they’d already vaccinated about 1,000 people, she said.

It was around then that seafood workers were filtering out and locals started filing into the school. Among those making their way in, were several high school students.

“I was just wondering how long the needle was,” said high school junior Alexa Esnardo, as she waited the recommended 15 minutes in a folding chair after getting her first Pfizer shot.

Esnardo is 16 and wants to get her driver’s license. And because the local Division of Motor Vehicles requires anyone taking a road test to be fully vaccinated, she decided to get the vaccine along with a number of her peers.

While Esnardo said she’d only signed up for the vaccine because she wants to drive and maybe go on vacation, she had this message for others: “Just get it.”

But high school senior Zara Alvarado got the vaccine for a different reason. She said she chose to get it because it’s an important step for her as she prepares to attend college at the University of Alaska in Anchorage next year.

Overall, getting the vaccine was a painless process, said Alvarado.

“It was really simple,” she said. “You just go in, mingle for a second, and get the shot and that’s it. It was really easy, surprisingly, for something so intense.”

During Thursday’s clinic, before community members lined up to receive their shots, the majority of the industry workers who wanted the vaccine got it, according to Unalaska Fire Chief Patrick Shipp.

The crew members of eight vessels were also vaccinated, according to Jeremy Zidek, a public information officer with the state’s Division of Homeland Security and Emergency Management.

Zidek said it’s critically important to get as many people vaccinated as possible, especially in rural areas like Unalaska, where the nearest emergency room is over a thousand miles away.

The regional tribal healthcare provider is expected to return to Unalaska to administer second doses in early April, according to Dr. Sarnecki. 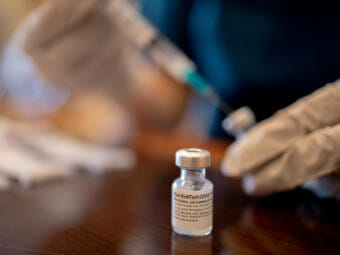 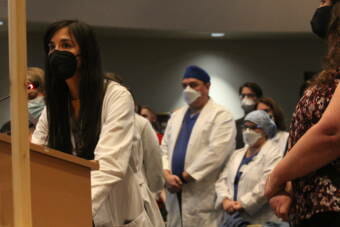 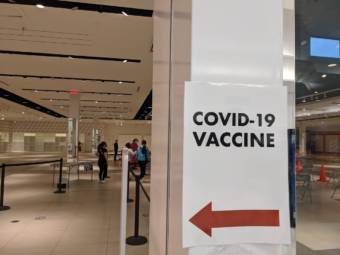