The governor’s office agreed to pay $65,000 to cover legal fees that Landfield’s company, Alaska Landmine, incurred during the lawsuit.

And both parties agreed that Landfield can have the same access to the Governor’s press conferences that other members of the media get.

But the lawsuit didn’t settle one big question: Who gets to be called a journalist in Alaska — and who doesn’t?

During the lawsuit, Dunleavy’s administration argued that Landfield isn’t a journalist. At least, not a traditional one. And ultimately that argument didn’t go anywhere.

But the question has lingered. This isn’t a profession like law — you don’t get licensed to practice journalism.

And it has been difficult to get any journalists in this state to weigh in on-record on the lawsuit.

“I got — quietly and privately — support from people in the media and reporters but I got, I don’t know, I think nothing publicly,” Landfield said. “The Press Club didn’t say anything.”

Tom Hewitt, who is on the state’s Alaska Press Club board, said he’s happy about the outcome of the lawsuit. But Landfield didn’t ask them for support and, in any case, he said that’s not really their role. Hewitt said the Press Club is an education and advocacy organization. It doesn’t really have the funds to fight lawsuits.

But, he said, what constitutes journalism in this state is broad, and he thinks it should be.

In the end, Landfield didn’t need that support. He won.

But in the same way that the opinions in Dunleavy’s administration impacted Landfield’s ability to do his job, other journalists do, too.

This year, lawmakers decided that for COVID-19 safety reasons, only one reporter at a time would be allowed to cover the floor sessions. So news outlets got together and worked out a rotating pool of reporters so that everyone would get a chance to cover them.

Everyone but Landfield. He was part of the planning process, but the other journalists and their editors didn’t want to work with him, and he said, again, no one would tell him why. But Landfield has a theory:

“A lot of people have not been super receptive to me or my style or my methods which maybe they don’t like or agree with or appreciate,” he said.

He isn’t traditional, at least not in the modern media landscape. He ran for a Senate office last year. He writes news and opinion interchangeably and uses a lot of anonymous sources. But he’s got thousands of readers, and he sees himself as a disrupter in a legacy media industry that’s struggling. He thinks some media outlets see him as a threat.

And he breaks a lot of news. As part of his legal team’s argument during the lawsuit, they compiled a list of times when legacy media outlets in the state and around the country referenced stories that he broke — you know, information that he published. And that list is long.

“What I would say to the people in the media who don’t appreciate me or like my style or what I do, you know, they should really stop using my work,” he said.

One journalist at KTOO speculated that perhaps ethics could be a good measurement — or the dividing line between who is practicing journalism and who isn’t.

The Society of Professional Journalists, for example, has an ethical code that says in part that you “seek truth and report it.”

Suzanne Downing, who writes and edits the conservative-leaning blog Must Read Alaska, laughed when she heard that. She said the idea that journalists at traditional media outlets could decide who practices journalism, but governments shouldn’t “is probably cognitive dissonance quite honestly, to have them decide who is ethical enough to perform journalism.”

Downing has a degree in journalism and worked in legacy newsrooms for a long time. She also edited opinion pages. Then she worked in politics. Now, she writes her news from a particular point of view that happens to be conservative. To her, it feels more honest.

She regularly criticizes members of the media in Alaska. And she thinks there are going to be more of these types of news-from-a-point-of-view outlets in the future — especially as people in the U.S. seem to be less and less trusting of traditional media.

Ultimately, Landfield said he’s just happy that he fought for his First Amendment rights and won.

And, true to form, Landfield said he’s trying to arrange a private meeting with the governor to resolve their differences.

“I said ‘how about a beer summit. Let’s get a few beers, get Jeff Turner in there, maybe Ben Stevens can come back for a weekend. Have a little chat, you know. Just bro out a little bit,’” Landfield said.

He said he hasn’t gotten a response to that invitation yet. 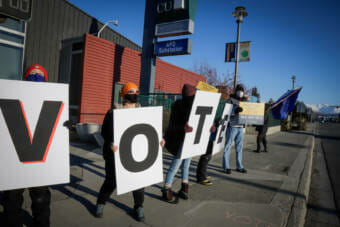 Forty-eight candidates will appear on the special primary ballot to fill out the remainder of Don Young’s term. Alaska Public Media's Casey Grove spoke with Washington correspondent Liz Ruskin about how political observers are making sense of the field.

'Do a little homework:' Dunleavy asks Alaskans to be aware of COVID-19 pandemic misinformation

He encouraged people to challenge those making allegations. 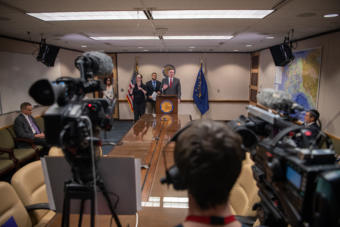 The temporary order came from U.S. District Court Judge Josh Kindred after a hearing on Wednesday. Kindred said Landfield’s legal team and the evidence they’d shown so far persuaded him that the Landmine would likely win its lawsuit against the state.