Tamala Booton and her husband were driving home on the night of Feb. 19, and they saw a tree on fire on the side of the highway. They called it in, pulled over, and started shooting video of a flaming tangle of branches and powerlines.

Driving on Egan tonight and noticed a tree was on fire. This is why your power may have gone out.

There’s the telltale flicker of orange flames, and then a blinding burst of light. The fire goes dark, and so do the streetlights stretching out in front them.

Jennifer Mannix is the City and Borough of Juneau’s risk management officer. She handles the city’s property insurance claims. She said there was new surge-related damage at Bartlett Regional Hospital, and to the city’s water and wastewater utilities, but she didn’t have specifics yet.

Mannix and Juneau residents found out this week that the local electric utility will not cover damage caused by another unusual power surge in November.

One way the utility measures its own reliability is by how long the average customer’s power is out each year. Driscoll said historically, it’s been less than two hours. Last year, it was close to ten.

When the power came back on Feb. 19, residents of the Blackerby Street neighborhood near Twin Lakes discovered scorched outlets and surge protectors, dead circuit breakers and fried appliances.

She was surprised she had any damage — she had a whole-home surge protector installed because of the November incident.

“We thought it hadn’t worked until we heard about all the damage everyone else had and then we were like, ‘OK, maybe it, like, mostly worked,’” Crondahl said.

“I lost my washer/dryer, my heating system, my hot tub,” she said.

She’s been in touch with her insurance company and the electric utility, AEL&P. She’s frustrated.

“Frustrated that AEL&P won’t take any responsibility,” Waldron said. “I mean, they keep saying they’re telling people to put surge protectors on their meters, but I think that should have been more of a priority.”

Debbie Driscoll from the utility company said there’s an inherent risk with electricity, and the utility usually isn’t responsible for damage caused by Mother Nature.

“It is frustrating for customers. I can understand that, absolutely,” Driscoll said.

In the latest case, Driscoll said AEL&P had properly maintained the trees in the affected utility corridor. But a tree from beyond the utility’s right of way fell into their power lines, which led to the fire and explosion that was caught on video.

Driscoll said the liability question was clear-cut in this case. But it wasn’t in the November case.

“That’s when you want someone else making that determination. You want industry experts, people that aren’t associated with AEL&P, and I know that our insurance company hired independent consultants,” she said. “So they hired a materials expert, they hired a standard of care expert. They hired people who are not part of Alaska National (Insurance Company), are not part of AEL&P to make a determination based on facts that they found on the liability.”

A piece of AEL&P equipment failed that led to the November surge. The utility’s insurance company said in its letters to customers it had been in excellent condition, but “spontaneously fractured” from ice buildup and wind. The insurer said AEL&P was not liable for the “extraordinary natural forces” and insurance claims would not be paid out.

Some individual residents, like Hayden Garrison, said their personal insurance policies did cover their damages from November, after their out-of-pocket deductibles.

One perk AEL&P continues to offer is free installation of whole-home surge protectors. They’re not full-proof, but their warranties cover a lot of home electronics. Several local electric shops sell them for about $200.

High avalanche danger prevented Alaska Electric Light & Power from going to the site of the outage right after it happened Sunday evening. 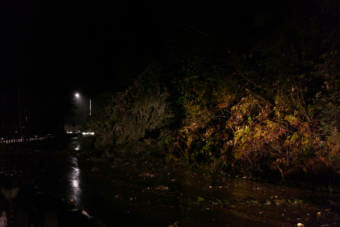 Storm brings high winds, falling trees and the potential for flooding to Juneau this weekend

The storm that rolled through Southeast produced between 3 to 5 inches of rain in 48 hours according to weather service data. 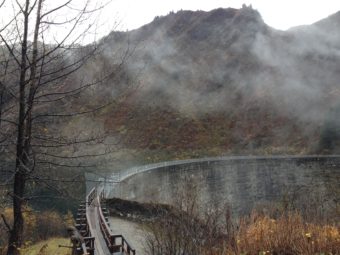 Many details — in fact most of the reports dealing with inspections, safety and emergency planning — aren’t freely available to the public.