Alaska journalist Matt Buxton has covered state politics for nearly a decade. Five years as a newspaper reporter in Fairbanks. And more recently as the editor of The Midnight Sun, a left-leaning political blog that covers the Alaska state legislature on Twitter.

“I am kind of a prolific live-tweeter, I cover meetings in as much detail as I can,” he said Friday from his home office in Anchorage. “And so, during this hearing, I thought some very interesting stuff was that Sen. Lora Reinbold from Eagle River was asking about hydroxychloroquine and sort of other debunked things.”

She was quizzing Department of Health and Social Services Commissioner Adam Crum on the availability of ivermectin, hydroxychloroquine, Vitamin D and zinc to treat COVID-19.

It’s important to note here that the National Institute of Health “recommends against the use of ivermectin for the treatment of COVID-19, except in a clinical trial.” The same goes for hydroxychloroquine — an anti-malarial drug touted last year by President Trump as a treatment for the coronavirus.

“And so towards the end of the meeting, she’s talking about how it’s important because the vaccine is causing deaths and paralysis and people are dying,” Buxton said. 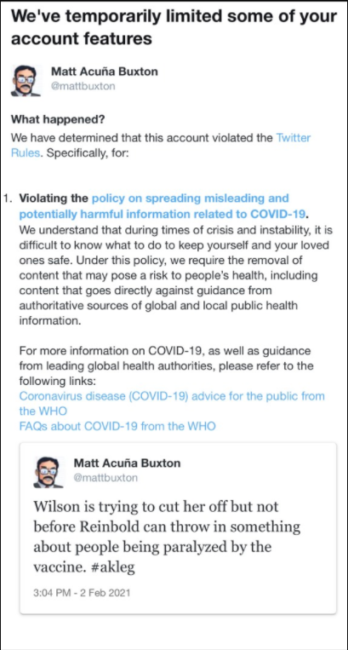 It was among a number of points she was insistent be read into the record while the committee chair, Sen. David Wilson (R-Wasilla) tried to hurry things along.

“There could be people dying, paralyzed — deaths,” Reinbold told the committee.

After that exchange Buxton tweeted: “(Sen. David) Wilson is trying to cut her off but not before Reinbold can throw in something about people being paralyzed by the vaccine.”

And that was flagged as as vaccine disinformation, Buxton said.

He didn’t know about that right away. In fact, he spent the rest of the afternoon using Twitter normally. But he later found an email from Twitter that had come in just after midnight saying his account had been suspended. He appealed early that morning.

“I wrote in, ‘Look, I’m a reporter, and was reporting on what a state senator was saying, I think this is pretty relevant…’ And my appeal was denied right away.”

He deleted the tweet which started his 12-hour suspension, which expires shortly after 6 p.m. Thursday.

Reporter silenced as lawmaker doubles down

But while Buxton sat in Twitter jail, Reinbold used another senate committee hearing to raise questions about the safety of COVID-19 vaccines.

“I am not an anti vaxxer,” she said on Thursday afternoon. “But I’m concerned about this new type of vaccine that is out there that they are only strictly under emergency use authorization. So I have the constitutional responsibility to help, as all of us senators do for the health and public health of the Alaskans.”

Then she pressed Alaska’s Chief Medical Officer Dr. Anne Zink about now-debunked rumors that Alaskans had died from the COVID-19 vaccine.

“There are no deaths associated with the COVID-19 vaccine, Moderna or Pfizer, in the United States,” Zink told the committee.

“Wow, that that that is amazing, because I’m certainly following COVID reactions online,” Reinbold replied. “And I tell you, I think that definitely contradicts things that I’ve definitely been following online.”

Buxton says he’d like to know what got him in trouble with the social media platform. Was it artificial intelligence? Were there complaints directed at his tweets? He’s not sure, and Twitter isn’t saying.

But in the meantime, he’s more concerned about misinformation going unchallenged. He cites the Anchorage Daily News article debunking misinformation about how five people were killed by the vaccine that was published as he was sitting out his Twitter suspension.

“This is a thing that is going on,” Buxton said. “We need to really meet it headfirst and I think it’s important to call out elected officials when they are spreading clearly dangerous information.”

“We made a mistake with this enforcement action,” a spokesperson wrote in a one-sentence statement.

The representative added the company would follow up with more information.

By then Buxton was already back at it, live-tweeting a Senate Judiciary Committee meeting chaired by Sen. Lora Reinbold. But he says the experience has had a chilling effect. He’s being extra careful how he frames his tweets.