Alaskans are experiencing human-induced climate change at a more rapid rate than any other state in the country. Tackling the global crisis can be daunting, but in Sitka, the city assembly and a group of concerned citizens are taking action with the revival of a decade-old task force.

Seventeen-year-old Darby Osborne is standing on a beach near the Sitka Sound Science Center.

“It’s pretty low tide right now. There’s a bunch of seagulls and eagles diving around in the ocean,” she says. “It’s pretty rainy out, typical Sitka.”

In the summers, she comes here to swim almost every day. It’s a place that inspires her climate change work, which she’s been doing since her freshman year of high school.

“Being able to see all the wildlife, being able to be near and sometimes in the ocean — I think it brings it close to home that this is what climate activists and environmental activists are trying to protect. It’s places like these.”

Osborne has applied to be part of a new Climate Action Task Force approved by the city assembly in November. The group hasn’t started meeting yet, but it has a big job ahead: to create a new plan to address Sitka’s impact on the climate with solutions the city can afford and that inspire people to get involved.

Osborne and a group she co-created called Youth for Sustainable Futures advocated for the task force’s creation.

“It really does mean a lot to people my age just because we’re seeing the decades stretch in front of us and we really don’t know what things are going to look like in the coming years, what the world is going to be like, even when we’re 60 or 70 years old,” Osborne said.

The committee is a revival of a short-lived task force that created a climate action plan for the city about a decade ago. That plan identified some of the ways Sitka is threatened by climate change and proposed actions the municipal government could take to reduce its carbon footprint.

“A lot of it got done, a lot of it didn’t,” said Michelle Putz, who led the past effort.

For example, the city converted several buildings to electric, so they could run completely off of renewable hydro power. A subsidy program also incentivized Sitkans to convert to electric heat and more efficient appliances. But some other proposed ideas about converting to electric vehicles or addressing waste didn’t come to fruition.

They also set a goal to reduce city emissions by 934 tons a year by 2020. City Public Works director and former interim City Administrator Michael Harmon wrote in an email that he thinks they reached it, but no concrete assessment has been done.

“I think it would be a great — one of the first steps — it would be great to see, did we actually get to a reduction or not?” Putz said.

“To not see the impact in this community, you’d have to close your eyes and keep them shut,” Sitka Assembly Member Kevin Knox said. He sponsored a resolution last year that attempted to declare a climate emergency in Sitka among other sustainability goals. But that got voted down by assembly members who thought it too drastic. Knox thinks the task force is a step in the right direction, but worries it doesn’t go far enough.

“Right now, I’m hopeful that they work as quickly as they can because I think we are way behind the ball at this point,” Knox said.

This latest action was co-sponsored by assembly members Valorie Nelson and Kevin Mosher. Mosher said he believes climate change is real, but he isn’t convinced it’s caused by humans. He also admitted that he’s not an expert and sees no harm in making Sitka more environmentally friendly, as long as it doesn’t increase the tax burden on local residents and involves them in the process.

“I want it to be practical, you know, real measurable goals that we can accomplish. Not pie in the sky things, but what can we really do?” Mosher said.

What can one small community actually do to address such a global issue? A lot, says local climate activist Leah Mason. She thinks if Sitka can become a leader in the region or even the country in tackling local impact and using renewable technology, the city could inspire others to follow suit.

While time is running out, Mason said, she has hope that there’s still enough to address the climate crisis. She thinks one thing that would help is transforming this temporary task force into a permanent commission.

Fifteen people have applied for the city’s Climate Action Task Force. The Sitka Assembly will choose no more than 12 at their meeting on Tuesday. 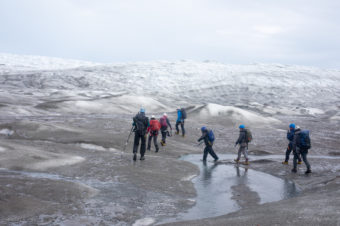