After being delayed for almost a decade, the federal government is moving forward with the process for designating critical habitat for two species of seal listed as threatened. What was supposed to be accomplished during the Obama administration has been dragged out by legal challenges.

But because their numbers aren’t low yet, and the threat comes from the loss of their habitat, Jon Kurland with the National Oceanic and Atmospheric Administration says the seals should have also gotten what’s called critical habitat designation.

“Critical habitat is areas within the geographical area occupied by a species that have physical or biological features essential to the conservation of that species, and may need special management over time,” Kurland said.

For ringed seals and bearded seals specifically, those areas need to have enough sea ice for the mammals to breed and nurse their pups, as well as provide enough food for the seals. As a result, Kurland says the proposed critical habitat area comprises a huge chunk of Arctic waters.

“It’s necessarily large because both of these species have really broad geographic distributions and they range widely,” Kurland said. “It’s the seasonality of that ice coverage that largely influences their habitat use.”

By law, critical habitat is supposed to be designated as soon as a species is listed as threatened, or within a year if the habitat can’t be determined at the time. Emily Jeffers is an attorney for the Center for Biological Diversity, a prominent conservationist nonprofit. She says for the bearded and arctic ringed seals, it should have happened back in 2012.

“And here, the government had been dragging its heels, so we filed a lawsuit to hurry up the process,” Jeffers said.

That lawsuit happened in 2019. Jeffers says she believes the main holdup has been a lack of focus from the Trump administration on conservation.

“I think the short answer in terms of why it’s taken so long is that the Trump administration has been more interested in selling off the Arctic to the oil industry than they were with protecting ice seals and our climate,” Jeffers said.

Kurland with NOAA thinks that assertion isn’t totally fair. First of all, the two species were listed under the Obama administration, four years before he left office. During that time, the State of Alaska, the oil industry and others filed lawsuits challenging the listing, claiming it was premature due to the current abundance of the two species.

“Both of the listings were vacated by the U.S. District Court,” Kurland said. “In other words, they were put on hold, basically. They were not in effect for a period of time while the litigation went on.”

Eventually, a circuit court upheld the listings for the bearded seal and the arctic ringed seal in 2016 and 2018 respectively. After that, NOAA jump-started the process during the Trump administration. Kurland admits it hadn’t been done as promptly as it should’ve been.

“We didn’t get any kind of policy direction that we should stand down and not designate critical habitat,” Kurland said. “But obviously we didn’t do it as quickly as is envisioned, and that prompted the litigation that got us to where we are today.”

As part of the settlement with the Center for Biological Diversity, NOAA has until March to finalize their proposal for the critical habitat. Last week, they opened their proposed habitat to public comment for 60 days. Once that is finalized, Kurland says the critical habitat will be in place, though that doesn’t mean it’s totally off-limits to human activity. For instance, Alaska Native subsistence hunters are exempt from the Endangered Species Act.

“There tends to be this perception that once it’s designated as critical habitat that means, ‘Hands off, we can’t go there. We can’t do any development or can’t touch those areas,” Kurland said. “That’s actually not the case.”

Jeffers with the Center for Biological Diversity says the group supports the area that was proposed as critical habitat. While it isn’t as strong as federally protecting the land as a national preserve or refuge, she says when the government makes decisions about the area, they will have to take the two species into account.

“The main impact that you see from critical habitat designations is making sure that when the government is permitting something, giving someone a license to do something, it makes sure they talk to the biologists so that the species isn’t impacted,” Jeffers said.

Even though the biologists that would review those impacts are part of the federal entity that put off the designation for years, Jeffers says she still has faith in the science side of NOAA despite the bureaucratic issues. 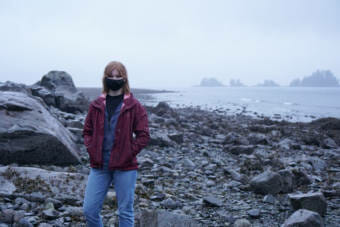