Juneau resident John Palmes, 74, decided to get up early on Wednesday to try to beat the rush to get a vaccination appointment. He went to the website that public health officials have been steering eligible people like him to: covidvax.alaska.gov. He clicked a link to schedule an appointment.

“First, I found a bewildering map,” he said. And he had no idea what do when he got there.

It’s a map of the state with pins for individual pharmacies and health care providers that intend to administer the vaccine. Each pin has contact info for the provider and a link to their website.

So, it’s basically a directory, not a centralized booking site like Palmes and others were expecting.

“It took hours and I finally figured it out,” he said. “I signed up, but I had no idea whether I could’ve gotten an injection earlier someplace else, because there’s no central coordination of anything, it doesn’t look like.”

The forms on different websites seemed broken in various ways. For example, he says he submitted one that gave him an error message that referred to missing information in a field that didn’t exist.

In the end, he got an appointment the old-fashioned way.

“That was on the phone,” he said. “It was impossible on the web.”

If you tried Palmes’ approach with Ron’s Apothecary Shoppe in Juneau on Wednesday afternoon, you might’ve heard a recording: “Due to the high demand and call volume for the COVID-19 vaccine, we are currently unable to take verbal requests at this time.”

The message says they don’t currently have any vaccine, but will know more in several days.

“I’ve been getting calls and emails and Facebook messages and texts from senior citizens and from some of their children … probably a couple of dozen, I think,” he said. “Lot of frustration. I think the department stumbled on this.”

The department he means is the Department of Health and Social Services.

“The bottom line is, is that we had a limited amount of appointments, and a lot of people wanting to make an appointment,” said the department’s Tessa Walker Linderman, who leads a state COVID-19 vaccination task force.

She wasn’t aware of any systemwide technical problems.

She and other state health officials in a press availability Wednesday acknowledged it’s been bumpy and cumbersome for users. They had considered a single vaccine appointment system, but health care providers wanted to use their own.

“This is a really challenging time for our providers, and they are trying to navigate so much right now,” said public health advisor Kelsey Pistotnik.

So, the department wanted to make it easy for providers and use a booking system they were already familiar with.

“But I think we do need to go back to the drawing board a bit here,” she said. “And see what we can do on the user perspective, just to make sure we can button this up a little better so that it’s not quite as cumbersome.”

State health officials say part of the challenge has been getting more health care providers up to speed to administer the vaccine. More clinics, providers and appointments will be added to the site as they come online.

Some communities are stepping in with mass vaccination events. Juneau has one tentatively planned for mid-January — if the vaccine shows up. It would be the first in the state. Health officials say Anchorage, Mat-Su, Fairbanks, and Kenai may follow.

Chief Medical Officer Dr. Anne Zink says the decision to open up this broad tier of eligibility for Alaskans 65 and older came last week, as demand from the last tier was falling off and vaccination appointments were opening up.

“Do we want to do this a bit faster? It’s gonna mean it’s gonna be a rough week, and it’s not gonna have enough vaccine,” she said. “And people are getting frustrated, because we would love it to be perfect. We would love for everyone to have spots available, and all be able to set and roll out. But we also don’t want a vaccine just sitting there with administrators who are being able to administer it without moving forward.”

For some perspective, she says this is only the third week of vaccinations, and Alaska is fifth in the nation for vaccinations per capita. She also offered an apology.

“We understand that it’s an imperfect system. And we are sorry for that. And we are constantly trying to improve the system,” she said.

John Palmes, the exasperated 74-year-old, has an appointment set for next week. 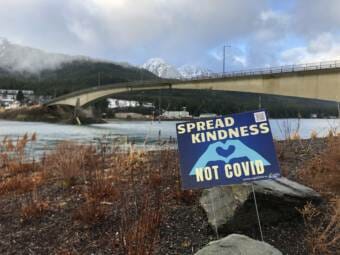 Overall cases of COVID-19 have dropped in Juneau, but there is still community spread occurring, which means that the source of some people’s infections is unknown.

Officials are waiting to see if there's a bump in case counts from holiday gatherings, travelers returning to Juneau and from the city’s latest free, asymptomatic testing event. 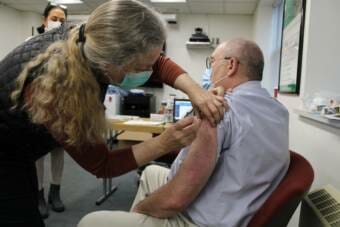 Alaska will prioritize people 65 and up for next round of COVID-19 vaccine, breaking from federal guidance

Alaska is asking frontline essential workers, teachers, prisoners and others in high-risk settings to wait until those elderly Alaskans can be vaccinated first.