As the COVID-19 vaccine rollout begins across Alaska, people are starting to ask: “when is it my turn?” For Alaska’s vaccine task force, the answer changes every day as pharmacists match vaccine doses to priority groups.

Dr. Tessa Walker Linderman, a nurse consultant for the Division of Public Health, is the DHSS lead for the task force. She told reporters Monday that the state health department is still in the very early part of the vaccine rollout.

“We are still in Phase 1A in terms of who Alaska is vaccinating, but discussions of future phases are happening,” she said.

Federal health officials are shipping doses of both the Pfizer and Moderna vaccines as fast as they can be manufactured and packaged. Dr. Anne Zink, Alaska’s Chief Medical Officer, says the state received about 60,000 doses of the vaccine this month — about 10 times more than expected.

“At the beginning of December, we thought we were getting, like, 6000, just over 6000 doses to start,” Zink said. “We’ve had to change plans drastically, and dramatically, on a very regular basis. We are working on these super-tight time frames. So when people say, ‘I want to know what date I am’ — we don’t know how much we’re getting in next week.”

First-come, first-served appointments for the last people in Phase 1A, essential health care workers, will open Dec. 30 on the state’s COVID-19 website. Those appointments will begin Jan. 4.

The next big question is who will be vaccinated in Phase 1B, much later in January.

The Federal Advisory Committee on Immunization Practices, or ACIP, makes recommendations for which groups should be prioritized for the vaccine. But leaves it up to the states and tribes to decide. 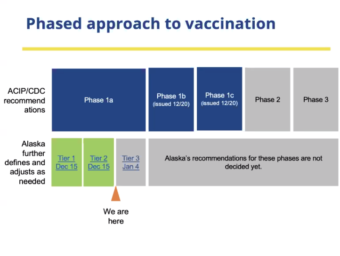 ACIP recommends that Phase 1B include people aged 75 and older and front-line essential workers, such as emergency responders, teachers and grocery store workers.

Alaska has its own vaccine allocation advisory committee, which held a workshop on Dec. 28 to give an update and take public comment about the next steps.

Zink says for Phase 1B, the allocation committee is looking at three principals — logistics, science and equity — to get the vaccine out quickly, effectively and fairly.

She said making allocation decisions means looking “across all different groups, taking consideration of their work, their ability to protect themselves, the service they provide, the morbidity and mortality they might see, age, underlying medical conditions.”

ACIP estimates that Alaska has 23,000 teachers and 6,100 first responders, such as police and firefighters. So another 60,000 doses — including the booster shots — would cover those groups in Phase 1B.

But the task force also received 347 written comments — and 52 people signed up to speak — about who else in Alaska should be considered essential workers. Commenters represented groups like electrical utilities, older Alaskans, water and wastewater utilities, gas and oil companies and teachers’ groups.

Stacy Marz of the Alaska Court System asked the committee to designate all court staff and judges as essential.

Lee Ryan of RyanAir said aviation workers should be part of Phase 1B because they “carry the responsibility of delivery of care to much of the state.”

Brent Payne of United Catcher Boats said fisheries workers were front-line because they are “producing food for our nation’s food supply.”

And Elizabeth Petrosik advocated for prioritizing people working and staying in shelters for survivors of domestic violence.

“Providing vaccines to staff and residents of domestic violence shelters and service centers throughout Alaska will allow them to continue to support the vulnerable population in their time of crisis,” Petrosik said.

Alaska’s vaccine allocation advisory committee will meet later this week to better define who is in Phase 1B.