In a historic first, the Iditarod Trail Sled Dog Race will not be finishing in Nome this year. The race was rerouted because of COVID-19 concerns.

Iditarod musher Aaron Burmeister said he was distraught when he heard that he would not be racing to Nome this year.

“My whole dream, most of my adult life and since childhood, has been to bring a winning team from Nome back to Nome. And bring the victory home to Nome,” he said. “So that’s something I’ve worked very hard for, and it’s been a goal of mine.”

Burmeister is a Nome local who grew up in the city and trades his time between Nome and Nenana, where he trains his team. This will be his 20th Iditarod, and he’s been in the top five finishers three times.

But the COVID-19 pandemic caused the Iditarod race organizers to create an altered route, one that goes through mostly unpopulated checkpoints.

The 2021 race begins and ends in Willow and sticks to tradition by following the southern route it uses every odd year. Teams will go to the abandoned mining town of Flat before turning returning to Willow, making a run of 810 miles.

Most of the checkpoints are abandoned mining towns or have just one cabin. The largest community along the route is McGrath, with a population of 310.

So if Burmeister wins, it won’t be beneath Nome’s Burled Arch.

Last year, the COVID-19 pandemic began to escalate while mushers were out racing the Iditarod Trail. It caused one community, Shaktoolik, to make the last minute decision to ban the race from entering their village.

Barely two-and-a-half months out from the ceremonial start of the 2021 Iditarod, some communities like Unalakleet hadn’t made a final decision about they felt safe enough to host the race. That’s according to Unalakleet Mayor Kira Apaachuaq Eckenweiler.

“It’s going to be difficult to not have them come here this year. And it’ll be strange. But we support their efforts to try to protect our community from COVID-19,” Eckenweiler said.

She says the community still puts their support behind the Iditarod and hopes to see it next year.

Unalakleet is one of the largest communities on the trail most years, with a population of about 700 people. It’s the first checkpoint on the Norton Sound coast and an often critical rest stop as teams prepare to traverse the ice of the sound.

And as Iditarod Board member and Nome Mayor John Handeland says, teams need lots of time to know how to prepare for the race.

“People have said, ‘Why didn’t you just wait till the beginning of March? You know, we’re getting a vaccine right now, and things could change.’ Well, that’s true, it’s just that things just seem to change every day with this,” he said.

Handeland says they were already cutting it close to make a decision. If a village forced the race to reroute at the last minute due to an outbreak, it would cause massive logistical challenges.

“Our mushers need to know right now, how to prepare,” Handeland said. “Where they’re going depends on what they put in their sled bags and the like, you know, if they’re not going to have checkpoint support along the way, that adds to their planning.”

Handeland found himself in a tricky position. As the mayor of Nome, he says the city was open to hosting the Iditarod. The Nome City Council passed a resolution of support for the race earlier in the year. But as a member of the Iditarod board, he understands the difficult decision race organizers found themselves in.

“Ultimately, the position that I took for the city was that we are disappointed that it’s happening, but we support the idea that the Iditarod’s needs to do this after they had consulted with many of the checkpoint villages in our area,” he said.

Handeland did vote in favor of changing the race route, a decision he says was made unanimously among the board.

Mushers will be following a safety plan which includes multiple rounds of COVID-19 testing and quarantining at the Lakefront Hotel in Anchorage before they can run the race. They’ll also take another rapid test in McGrath before they can finish the race.

It’s still unclear how social distancing will be enforced at the ceremonial start in Anchorage.

It’s become a common misconception that the Iditarod race commemorates the 1925 Serum Run when dog teams carried life-saving serum to Nome during a diphtheria outbreak. But according to the site’s website, the race was created to preserve the sport of dog mushing.

And during a time of global pandemic, staying safe and being with his dogs is what matters most for Burmeister.

“I would be racing regardless of the virus or not, regardless of knowing what the trail was going to be or not, because it’s not just an event,” Burmeister said. “It’s a lifestyle.” 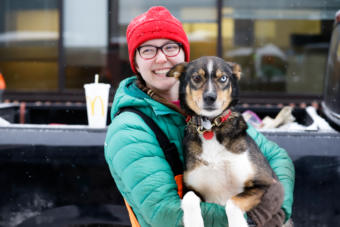 From queen of the yard to life of the party: Meet 5 of this year’s Iditarod dogs

Hundreds of sled dogs are running across Alaska this week as the Iditarod Trail Sled Dog Race plays out over 1,000 miles from Willow to Nome. 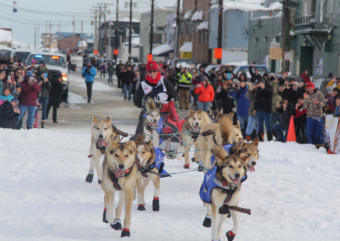 Iditarod mushers will still be finishing on Front Street in Nome next week, but the city of Nome will not be hosting any festivities.