On Friday, Gov. Mike Dunleavy debuted a budget proposal for next year that will lean heavily on earnings from the Permanent Fund to help Alaska recover from the pandemic.

According to his budget proposal, he wants to draw about $6.3 billion from the state’s permanent fund earnings — about half of that is part of the regular draw that would happen under state statute. The rest, he’s calling a one-time ask — saying he doesn’t intend to regularly lean on the fund to pay for large expenses.

“But this year is different,” he said. “This year we have to get the economy back up off its knees and on its feet.”

That figure is about $3 billion above what the Legislature and the Permanent Fund Corporation have said is sustainable.

He’s also asking the Legislature to quickly approve back-paying a full permanent fund dividend to Alaskans for 2020, which would be about $1,916. That would be an addition to the $1,000 dividend checks that already went out this year. And, he’s proposing that the Legislature pay a full PFD in 2021.

“That would come up to about $4,972 for Alaskans,” Dunleavy said. “Again we have the tools to do that this year. This is not something I’m proposing we’ll do every year.”

He’s also proposing that the state borrow up to $350 million to upgrade or build new infrastructure across the state, pitching it as a way to put Alaskans to work and address record unemployment.

Gov. Mike Dunleavy is ready to propose his third budget. His first budget proposed dramatic cuts to state services. The next didn’t include those deep cuts, but it drew down state savings. This time, it’s not clear what his plan is — though there are some key things to know ahead of his announcement.

The state’s government has been hit hard by the ongoing COVID-19 pandemic, harder than many other states. The state’s budget deficit is now more than $2 billion and the politically divided legislature has struggled to agree on a solution to address it.

Dunleavy will be accompanied by the Department of Revenue Commissioner, Lucinda Mahoney, Office of Management and Budget Director Neil Steininger and the Alaska Housing Finance Corporation CEO and Executive Director Bryan Butcher.

The announcement is scheduled to begin at 2 p.m. You can stream it here, and check back in for updates.

This is a breaking news story that will be updated. 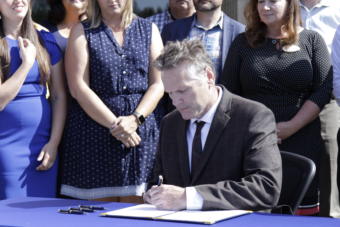 Gov. Mike Dunleavy is getting ready to propose his third budget, but it’s not clear what his plan is -- or exactly when we’ll see it.