The wrongful death lawsuit against the Juneau police officer who fatally shot 34-year-old Kelly Stephens last year is over.

Filings in the U.S. District Court of Alaska say both sides agreed last week to drop the case. The parties also agreed that this is the end of the federal case.

The lawsuit was against Officer James Esbenshade, Police Chief Ed Mercer, and the City and Borough of Juneau. Stephens’ family sued in July, seeking damages and the department to improve its investigations into uses of force.

Esbenshade’s body camera and dashboard camera captured the fatal shooting. He was responding to a report of a gunshot at a housing complex. Within seconds of getting out of his car, Stephens repeatedly threatened to kill the officer while walking toward him and swinging a rope leash with a carabiner and chain attached to it.

Esbenshade ordered him to stop three times, then shot Stephens once.

In a press release, City Manager Rorie Watt thanked the community for its patience as the reviews and judicial process played out. He also expressed sympathy to Stephens’ friends and family.

Lawyers for the family were not ready to comment.

State attorneys say they are reviewing the material in light of the family’s request and will respond by early next week. 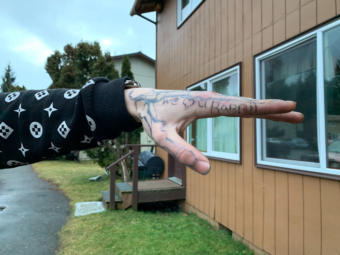 Virginia and Kevin Stephens have named Officer James Esbenshade, Chief of Police Ed Mercer and the City of Borough of Juneau in a civil lawsuit for the wrongful death of their son.

Juneau police identified Kelly "Rabbit" Stephens as the man who was killed. The officer has not yet been named.