Joe Aultman-Moore: I was in the middle of eating a late breakfast or I guess it would have been lunch at that point, and yeah, and I heard it (the landslide) coming through.

JA: I think it was a fisherman who described it as like a “whoosh.” That’s what it was. I thought it was a big gust of wind. But it just went on for too long and it was weird. You could almost feel it, it was like a kind of a bass vibration almost. So I went out and I looked around, I didn’t see anything at that point. There was a secondary smaller slide and I saw trees going down. And that’s when I called 911. Because I was like, ‘oh, okay, like, there are people over there. This is big.’

So called 911. They said evacuate immediately. So I got all my gear on. I didn’t even didn’t grab anything at that point. I ran up to the road, and there was just a wall of broken trees 30 or 40 feet high. Several cars were there, several neighbors and they were looking at it saying like, ‘Yeah, we got the call to evacuate, we can’t evacuate, like clearly this is it’s impossible to get past this.’ And so I called 911 again, ‘We can’t evacuate like it’s, it’s clearly cut off.’ And then they were like, ‘Oh, we’ll call you back.’ I’m like, ‘Okay!’ So I had a very, very tense 15 or 20 minutes.

The Haines dispatcher call back and she said, ‘Get a flare go down to the beach, we’re gonna have boats come and evacuate people off Beach Road. So I was like, ‘I don’t have a flare.’ So I grab my flashlight and grabbed a little backpack. And when you hear that tone in their voice, when they’re saying ‘get out now,’ every single second, you’re spending, wondering if you should grab, you know, this or that book or your laptop or whatever, every moment you’ve been thinking about that is a moment, that could be the difference between life and death.

Luckily, I have easy beach access. So just ran right down there. There were several fishing boats coming around the corner at that point. And we have my flashlight and they came right over. And then we had to go almost all the way over to the other side of the cove to get around the debris pile to get into the harbor.

KHNS: What could you see in the in the debris in the water?

JA: Just trees, shattered trees and floating bits of insulation board. At that point, that was the first time any of us really were seeing the extent of the slide and realizing that if anybody was in the path of that thing, like the mountain fell on them. It’s just total devastation. Anything in the path of that slide was total devastation
There were no trees left. There is no roadm no, nothing.

KHNS: I guess you made it to the harbor, is that where they took you?

JA: Yeah, so came into the harbor and the boats went right back out. It’s just, I walked to the Mountain Market cuz, the library was closed, the stuff was good. I just like walked down the mountain market. And just like sat down. And of course, at that point, it was so recent. Nobody nobody the Mountain Market knew really yet so that was that was some weird whiplash.

KHNS: After all this happening to you like how, how are you feeling? Are you feeling sad about what happened or distressed or grateful for you being rescued?

JA: It’s funny, because I think that least from what I can tell the other people who were also the people who were immediately taken off that beach, especially like the day afterward, we were all just ecstatic to be alive and in town. And so it was strange having this, you know, this huge destructive tragedy happen and we’re, you know, we want to throw a party. But there’s lots of complex emotions and especially realizing, realizing the extent of the tragedy that happened over there. 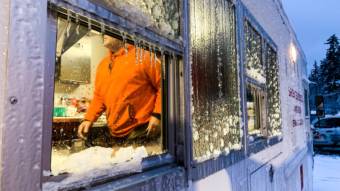 Snow, ice and then rain complicated the efforts in Haines of city and state crews that have been working to clear roads of landslides and debris, because most of them spent the morning clearing snow before they could get to work. 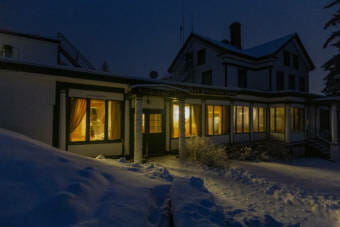 Closed for the past 18 months, Haines hotel opens up for a community in need

"We didn't open this summer," said the Hotel Halsingland's owner. "But I guess we're opening this winter instead." 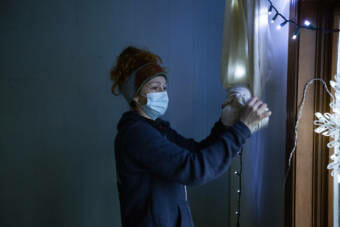 'Haines makes it happen': At least one woman is back in her flooded home after outpouring of support

Along with dozens of other displaced Haines residents, Lin Edgar's been sleeping at a hotel all week. But thanks to an outpouring of community support, her house was ready to sleep in again by Saturday night.