Heavy precipitation, mudslides and flooding have damaged infrastructure across the Haines Borough over the past week. City and state workers are busy protecting and restoring roads, the water supply and the electrical grid.

There are more roads closed in Haines than can be counted. The Haines Borough’s Public Works department has been working to get roads opened up, but the risk of more debris coming downhill is making it difficult to impossible. .

“As of yesterday afternoon I know that they had a little path cut through there,” Coffland said, “But I would not travel on that road unless it was an absolute emergency.”

Heavy snowfall early in the week caused Alaska Power and Telephone to switch the Haines Borough’s main electrical supply from hydropower to a diesel generator. That had local officials worried because the generator relies on regular fuel deliveries and there have been numerous mudslides along the road to the freight dock.

Now the town is back on hydro, but according to Haines Power Operations Manager Lance Caldwell there are outlying areas that have been without power for several days.

“I’m going to venture to say there’s probably 40 homes at the current time out Lutak [Road] and the opposite side of the slide at Beach Road that currently do not have power,” he said. “Some of those areas are too dangerous and haven’t been evaluated well enough yet to allow crews in those areas to assess or even think about making a plan to return power.”

Numerous homes have been evacuated due to the risk of landslides. Caldwell says it is recommended that residents turn off the main electrical breaker in their homes in the event of an evacuation.

“If you don’t turn it off and you have a slide or a flood and it trips things off, it could eventually trip a whole feeder off and we could lose a quarter of town all over that one service,” he said.

The landslides have also compromised the town’s water and sewage systems.

Public Facilities Director Coffland says that his staff have been unable to access one of the town’s water treatment plants off of Piedad Road.

“We need to be able to continue to supply chemicals, particularly chlorine, to it,” he said. “We’re thinking that we may have to shut that plant down. Either that or we would have to go on to a boil order for the entire town, so likely we are going to shut that down soon.”

Coffland says if they have to shut off the plant, there is still an adequate supply of water from the Lily Lake reservoir.

Meanwhile, the town’s sewage system has been inundated with water and debris.

“We have a vacuum truck that is arriving today, which we are going to be using to clean the manholes out to get the rock out and get as much out as we can. That’s just an ongoing effort with that,” he said.

Coffland says he has received calls from about 50 residents volunteering to assist the public works department, but has not had time to manage them. A system for organizing public works volunteers is being developed. 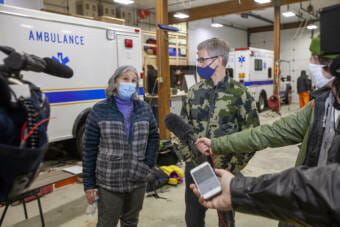 Two teams searched debris that washed onto miles of shoreline north of the slide. Juneau Mountain Rescue and two dog teams stand by at the slide site, waiting for the green light from geologists to begin the land search. 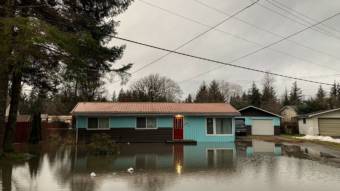