The City and Borough of Juneau is warning residents to be prepared in case heavy rains and snowmelt cause landslides or avalanches.

With high winds and heavy rain expected on already saturated ground, people living in hillside areas should be especially vigilant.

Capital City Fire/Rescue recommends residents in those areas should have evacuation plans ready.

The department suggests checking with friends or family to stay with in the event of an emergency. The Red Cross can also help people find places to stay if necessary.

CCFR is getting some “what if” questions about what happens in the event of a landslide.+ If your building is being…

CCFR Chief Rich Etheridge said as of Tuesday afternoon crews had not responded to any landslides. The city public works department has been out pumping culverts where flooding might be an issue, such as along Tongass Boulevard in the Valley.

A flood advisory remains in effect until Wednesday morning. An avalanche along Thane Road Tuesday afternoon did not cross the roadway.

The first avalanche of the season has come down out Thane Road.  The snow reached the road that did not cross it.We…

In the event any kind of large scale evacuation would be necessary, Etheridge said Centennial Hall could be used as an emergency shelter.

The city has used the downtown convention center as a COVID-19 isolation and quarantine facility for the past few months. No one with COVID-19 is currently staying there. 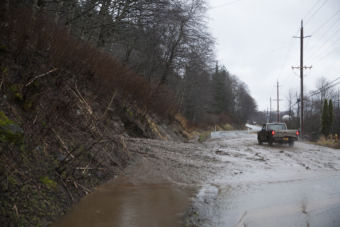