Share:
A 14-year-old project in downtown Juneau is nearly complete.

The finishing touches are being put on the new Father Andrew P. Kashevaroff State Library, Archives and Museum, widely known as the SLAM building, as facility managers prepare for its grand opening on June 6.

The nearly $140 million facility combines the state library’s information services and historical collections as well as the state’s archives and state museum into one 118,000-square-foot building.

Bob Banghart, deputy director of libraries, archives and museums, gave us an early tour of the facility last week. Here’s a sneak peak.

Left: Workers move across a map of Russia, Alaska and Canada in the lobby of the building. The map includes nine site names including Juneau, Sitka, Fairbanks and Bethel. Top right: The map is laid out in the true north direction and could be modified with more coins marking specific geographic locations in the future.  Bottom Right: Cast glass pieces by Portland artist Walter Gordinier adorn the lobby of the building. (Photos by Rashah McChesney/KTOO)An old favorite from the Alaska State Museum was installed in the building before the roof was closed.

Because of its size, the eagle-laden tree’s trunk had to be lowered into position by crane. The roof was then completed, the tree unwrapped and the eagles installed.

The main staircase in the lobby of the building is shadowed by a life-sized model of an eagle nesting tree complete with eagles that were on permanent display in the former Alaska State Museum and were restored before installation in the new building. (Photo by Rashah McChesney/KTOO)

A Ketchikan artist’s first foray into glass will be the dividing line between the library and research center of the state library.

Evon Zerbetz’s 10-foot tall, 80-foot long piece was scanned to black and white and then printed on the glass, then Zerbetz worked with the color and additional layers of glassing to give it a 3-D aspect.

Evon Zerbetz’s “We are Written Between the Layers of the Earth” is on display in the new state library. Zerbetz, typically a printmaker, ventured into the world of stained glass with this piece. (Photos by Rashah McChesney/KTOO) 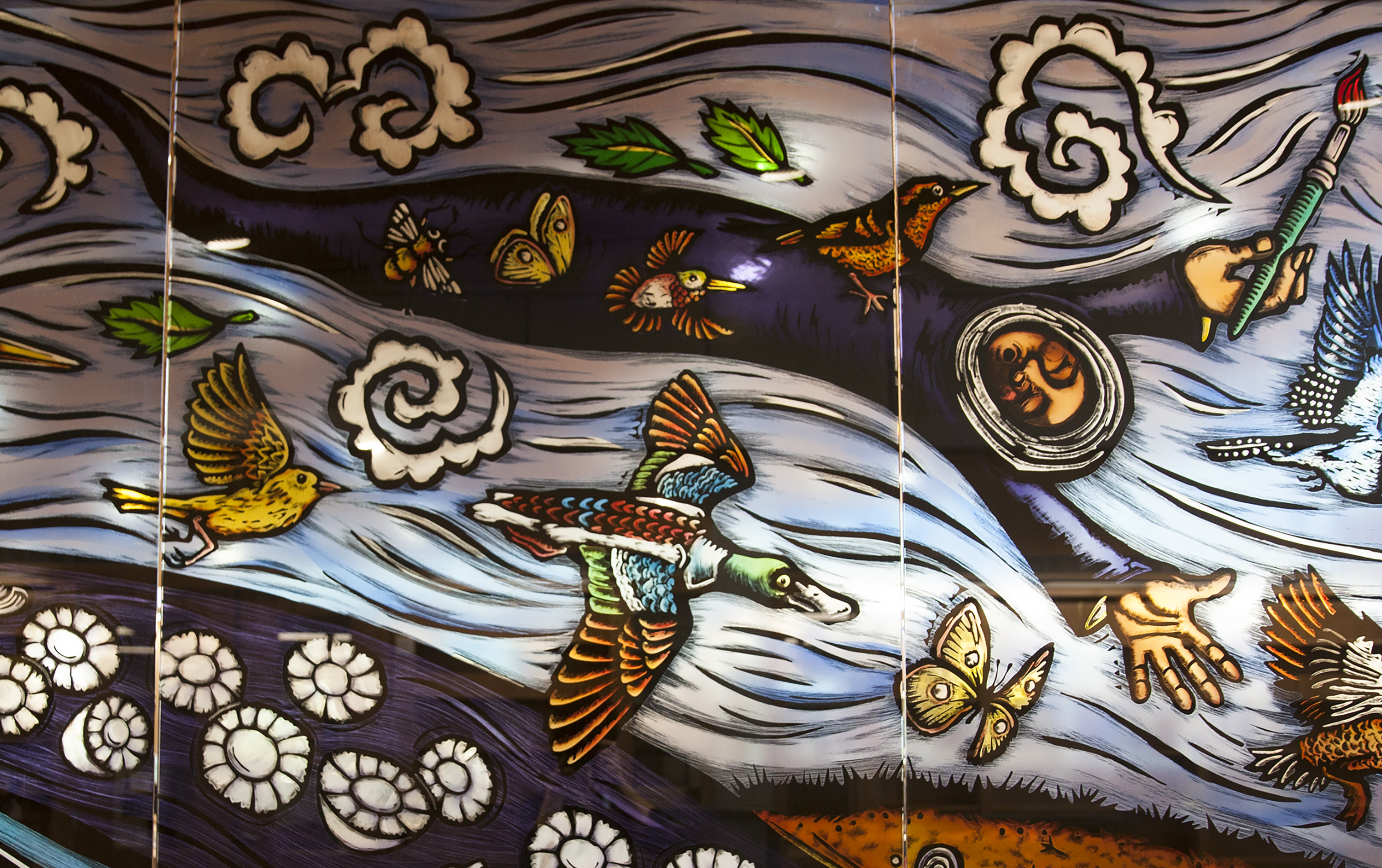 Left: A woman unpacks her desk in the administration wing of the building. Top right: The research wing in the archives is unpacked. Bottom right: Workers clean the carpets in the state library.

A controversial, 38-year-old sculpture was put into place in front of the building before work began on the driveway and landscaping.

The brilliant green Nimbus was first partially restored. The restoration work included a fresh coat of paint in 2015 when the sculpture was installed on new steel beam framework.

Canadian sculptor Robert Murray traveled to Juneau to inspect the restoration in progress and make sure that the sculpture’s arch form fit in with its surroundings.

Nimbus has been criticized for both its abstract form and color in the four decades that it has been in Juneau. The National Endowment for the Arts, the Alaska Court System and the Alaska State Council for the Arts originally funded the sculpture. In 1984, disgruntled state lawmakers found a way to force Gov. Bill Sheffield to remove the sculpture from the court building site. 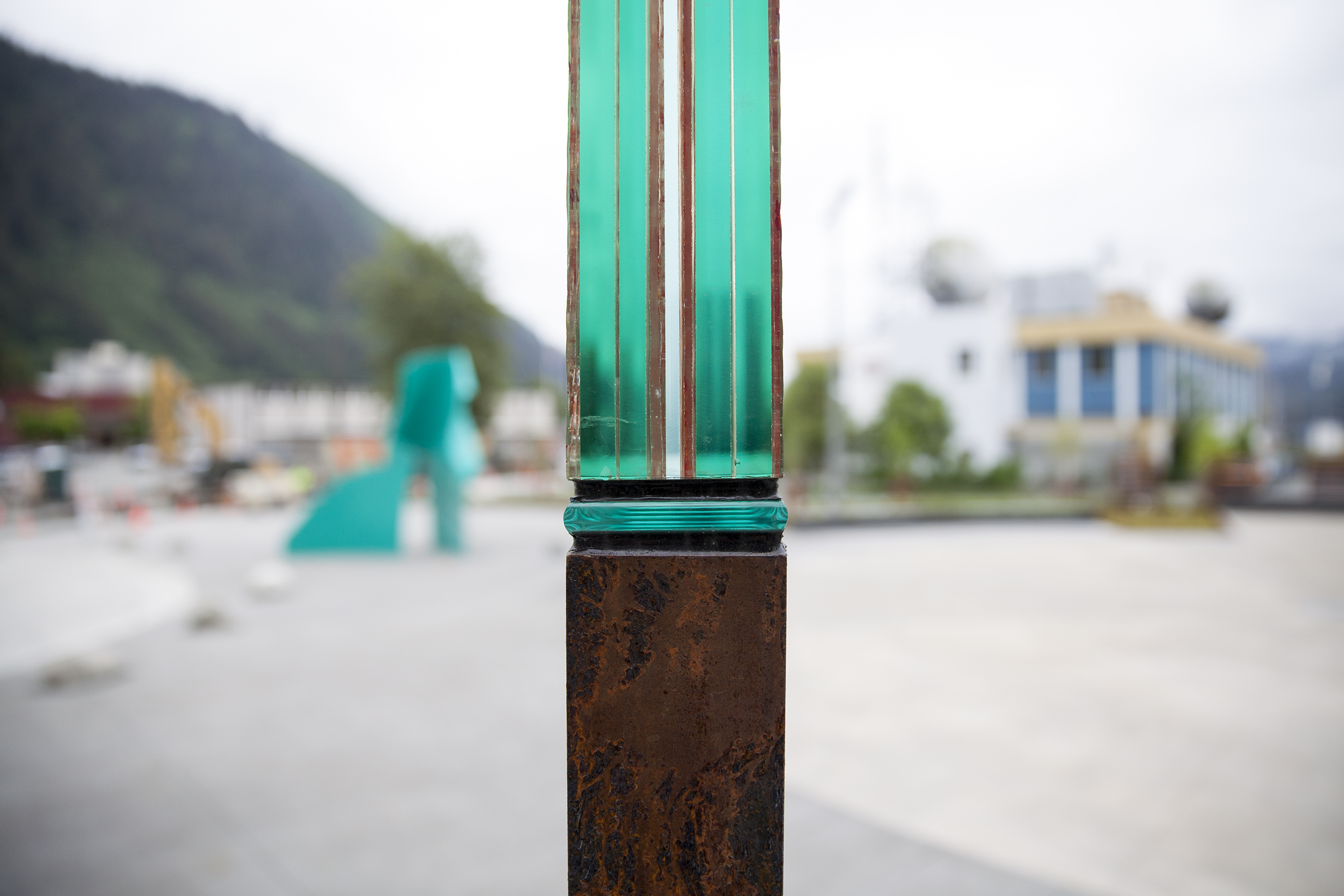 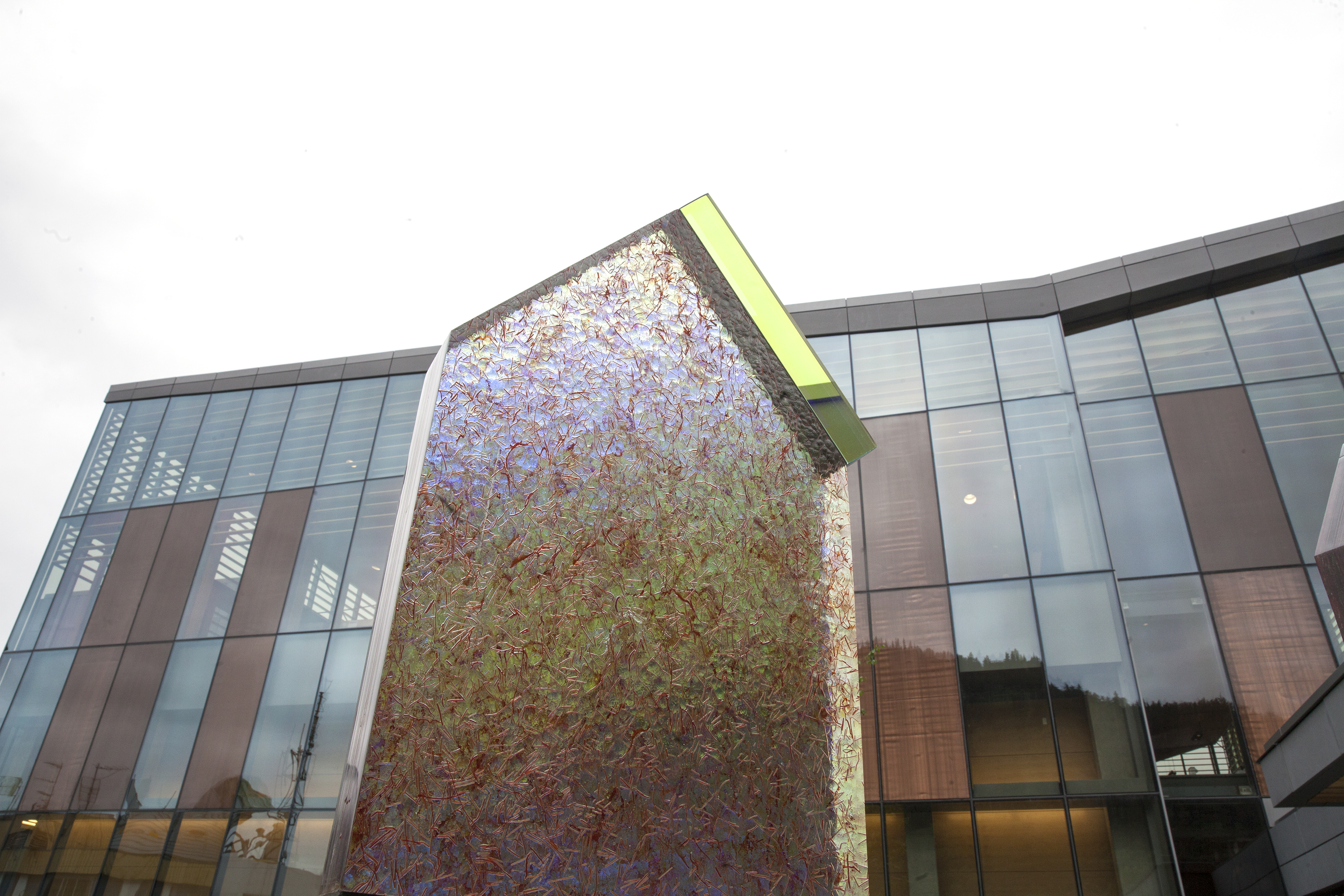 Top left: Robert Murray’s Nimbus was commissioned in 1977 and first installed in front of Juneau’s Dimond Courthouse.  The 5-ton steel sculpture is 16 feet tall and was removed from the courthouse at the request of the Alaska Legislature and turned over to the museum. Right: Walter Gordinier’s glass artwork leads to the entrance of the building. (Photos by Rashah McChesney/KTOO)
You can watch video of our tour with Bob Banghart here.