A week after wrapping up her tenure, Broyles says she’s excited to return to college next month, and says the crown is in good hands.

Emma Broyles: It’s funny enough, because I actually knew Grace before she won Miss America. We had gone to Miss America’s Outstanding Teen together representing the states that we then won Miss America with. So I’ve known her since I was about 15 years old, and it was really cool to pass that title on to somebody that I know is going to do it justice. And it’s funny because you’re talking to me right now, and I’m wearing no makeup. I don’t think I haven’t put on makeup since the night that I crowned the next Miss America. I’ve made a full 180-turn away from the pageant world, and I’m now back to where I left off as just being Emma.

Wesley Early: As Miss America, I’m sure that your focus went beyond being from Alaska to sort of being this representative for the whole country. But did you feel like an ambassador for a state that’s so far away from the other states?

Emma Broyles: I really did. Every time I did an event I was often asked where I was from, what state I represented. And people are so excited to learn that I’m from Alaska. And it was funny, because obviously, as Alaskans know, you hear a billion stories about people that you meet, and their great aunt’s best friend’s cousin who once went on a cruise to Alaska in 2005. But it was really cool getting to hear stories of all of these people that I met throughout the year, and how they have connections to Alaska in one way or another. But it’s really cool. I mean, I was able to represent Alaska, and represent America. But I really felt like I was representing my roots throughout everything that I did during my year.

Wesley Early: When we spoke at a Service High pep assembly earlier this year, you had noted that you were excited to do more than just wear a crown. Talk about the advocacy that’s so important to you, especially surrounding children with intellectual disabilities.

Emma Broyles: Yeah, I got to do a lot of work very closely with Special Olympics International, of course. You know, my brother has Down syndrome. He’s been a special athlete for ages. But it’s been really neat to be able to get to work with Special Olympics, and I’m actually continuing my ambassadorship with them for another year and a half now that I’m not Miss America anymore. And I’ll actually, I think, going to the Super Bowl with them pretty shortly in Arizona, to do media for them, especially on Radio Row, which I’m incredibly excited about. But beyond that, being able to do not just Special Olympics that I was focusing on, but also mental health advocacy was incredibly important for me. Being able to share my story with having ADHD and OCD and how those things have affected me and made me who I am and how, despite having what some would call these hindrances, I’ve been able to become Miss America, and I’m now headed to medical school to become a doctor. So it’s been really special to be able to take different communities that mean so much to me and represent them in the work that I did as Miss America.

Wesley Early: And I saw another aspect of your advocacy recently that had to do with helping provide eyeglasses for Alaska Native children up in the Western Alaska village of St. Mary’s. Can you describe that experience and any other efforts you made to try to use your platform specifically to help Alaska?

Emma Broyles: That was a really cool experience, because despite living in Alaska my whole life, I had never visited a rural community in Alaska. I don’t know if many people who are listening have been to St. Mary’s, but you take these two little Bush planes. You have to go through the run that happens daily. And we got there, there’s no cell service. Actually, I had GCI, so I had at least one bar of cell service, whereas everyone else I was traveling with who had big networks in the Lower 48 did not have service. I was very happy about that. We had no Wi-Fi, barely any service. There were no restaurants there. So we went grocery shopping. It was such a unique experience. And I felt like I really gained a greater appreciation for our state and the things that make our state so unique. The town was so incredibly welcoming. They welcomed us with open arms. I met so many young children as they tried on their glasses. And they were so not used to having visitors come into town that it was so special. We drove through the truck and, you know, there aren’t a ton of cars there. A lot of people get around by snowmachines. So it was really cool, because they were all waving as we were driving through the town in a truck. But it was such a cool experience, and it gave me such a great appreciation for our state and the things that make our state unique. But more than that, it was just really a huge honor to be able to provide those glasses to young students, which many of them had outdated prescriptions or they couldn’t afford to come into Anchorage, because it’s close to $1,000 for a round-trip to come into Anchorage to get to receive proper health care. So it was a really cool experience. And I’m so glad that Glasses USA chose St. Mary’s and chose Alaska and worked with our school board to make sure that Alaskans can be beneficiaries of their work.

Wesley Early: Do you see yourself continuing to be a role model for young girls in the state, post-Miss America?

Emma Broyles: Indeed. So once I finish my undergraduate degree here soon — I’m at Arizona State for that — but I have always dreamed of being part of the WWAMI program. So being an Alaska resident, but going to medical school at the University of Washington, which means that I’ll then return to Alaska to serve in a rural community for two years. And then I’ll likely practice medicine in Alaska as a dermatologist someday. And it’s something that I’ve always dreamed of returning home to be able to share, you know, my knowledge and practice medicine and give back to the community that’s given so much to me. And I hope that I’ll be able to continue to do that throughout the rest of my life, sitting on various boards and assisting the community where I can as a public figure, and showing young girls, young Alaskan girls specifically, that you can do whatever you want to do. It doesn’t matter where you come from. It doesn’t matter if you come from a random town up in Alaska in the middle of nowhere, you can still achieve greatness. 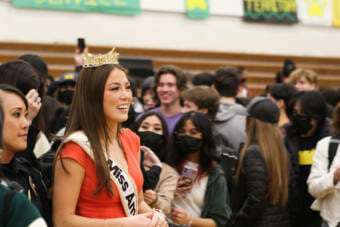 During her run for the crown, Broyles competed on a platform of inclusivity, highlighting her work with the Special Olympics. 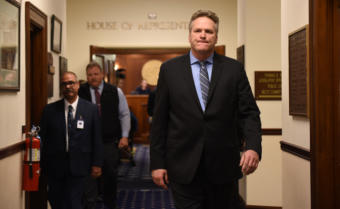 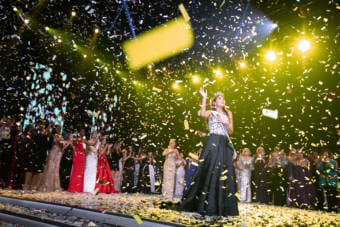 Broyles, 20, is a Service High School graduate and currently in her junior year at the Honors College at Arizona State University.