The Environmental Protection Agency has recommended a ban on mining activities in the area around the Pebble deposit. People across Bristol Bay are now waiting for a final decision on the future of the controversial copper and gold prospect.

“I think it sends a real strong message that the science is there; that it’s going to have unacceptable adverse effects on our watershed,” said Gayla Hoseth, the second chief of the Curyung Tribal Council and the natural resources director for the Bristol Bay Native Association.

Hoseth welcomes the move. She said those opposed to the mine have wanted this decision for a long time.

The EPA wants to prohibit the discharge of mining materials in the North and South Fork Koktuli River watersheds, as proposed in Pebble’s permit application. The agency cites its authority under the Clean Water Act to do so. It would extend that prohibition to any future proposals to develop a mine at the Pebble deposit that could result in a similar loss of aquatic resources. The action would effectively kill the mine.

EPA Region 10 Administrator Casey Sixkiller said that if the agency’s Office of Water approves the recommendation, it will provide protections for both commercial and sport fisheries and a way of life for “one of the last intact wild salmon-based cultures in the world.”

“When the information came out yesterday it took a while to actually absorb it,” Hoseth said. “That we were finally this far, that we got this far with the recommendation.”

A broad coalition has worked to oppose Pebble over the years, from tribes and community groups to commercial and sport fishing organizations. Hoseth said tribal consultation with the EPA has been a critical part of this process.

“I want to encourage tribes to take advantage of that government-to-government opportunity that we have,” she said. “Because that’s the time that we can actually sit down and have the dialogue back and forth to have our voices heard from a tribal perspective. And then when your voice is heard of what we are protecting and how we’ve been sustained on salmon for generations after generations, and as we are here today to make sure the protections that are here today, that they continue into the future.”

Jonathan Salmon was attending the state Board of Fisheries meeting for Bristol Bay when the recommendation was announced.

He said EPA officials, including Region 10 Administrator Sixkiller, made an effort to get to know the area. They visited his small home village, Igiugig, earlier this year.

“They got to talk to us and we gave them a tour of Igiugig and who we are and why we’re there. And it was really great to see that our emotion and our responsibilities were able to be shared with him so he can understand the detriment a mine would propose to the region and be able to move the 404 forward,” Salmon said, referring to the section of the Clean Water Act that gives the EPA the authority to block the mine.

Debates around the potential merits and drawbacks of Pebble have gone on for years. Most people in the region oppose mining. But Salmon said that’s not universal.

“Of course we have friends, family members, fellow villagers, and we all have different views. It’s not square across the board. But it doesn’t mean you need to break personal ties over opinions,” Salmon said.

One of those opposed to a ban is Chasity Anelon, who lives in Iliamna and works for Pebble Limited Partnership, the company looking to develop the mine.

“I was just very disappointed in the EPA, because there are people that live in rural Alaska that need to have jobs to be able to support their families to live here. And this would be a great opportunity for that,” she said.

Anelon was thankful that Administrator Sixkiller visited Iliamna. But she is frustrated by his decision. Her family fishes for salmon in the summer and fall, and she wants her daughter, Stormi, to be able to live and harvest there.

“It’s just really hard,” she said. “I know that everybody has their own opinion about it, and I want Stormi to do the subsistence things that we all do as well. But I know that you need a boat and a motor and a net to go and get the fish, and it costs money. And it’s not free. But I’m very thankful to live where I’m at. This is why I live in Iliamna. I love it here. And I’m very thankful to have a job.”

Anelon said she understands that fishing is a big economic foundation in other parts of the region. But commercial prospects have declined in Iliamna; Anelon said many people have sold their commercial fishing permits.

“This action is unprecedented. And when we say unprecedented, to help spell it out, is that the EPA is pursuing a veto, what we call a preemptive veto, of the project before the permitting process has concluded,” he said. “And it remains our view that the process for the EPA to follow is a permit is granted by the Corps of Engineers, and then the veto actions are followed by that.”

Two years ago, the U.S. Army Corps of Engineers denied Pebble a federal permit. But Heatwole said the permitting process is ongoing.

“They made a decision and we have the right under their process to appeal the decision,” Heatwole said. “Once we did, that appeal was accepted. And we’re working through that at the moment. So technically, the Pebble permitting process is still underway, if you will.”

Now that the regional administrator has recommended blocking the mine, the agency’s assistant administrator for water, Radhika Fox, has 60 days to decide whether to impose the veto, make changes or reject it entirely. 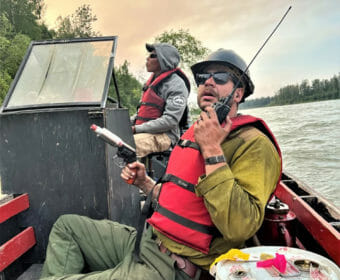 No one was at the site when the fire burned through the area.