Juneau police have arrested a man in connection with the killing of Faith Rogers. Her body was found on the Kaxdigoowu Héen Dei, or Brotherhood Bridge Trail, on Sept. 21.

Anthony Michael Migliaccio, 34, was arrested in Juneau on Thursday evening under a warrant for first degree murder, according to a police press release. Police say the arrest was without incident and took place in the 2000 block of Lemon Creek Road — which is consistent with the address for Lemon Creek Correctional Center.

Juneau police originally reported that the man’s last name was “Migliacco.” But in charging documents obtained by the Juneau Empire, that name has been crossed out and replaced with “Migliaccio.”

The charging documents show that police detained Migliaccio on the same day that Rogers’ body was found. And several witnesses saw the suspect in the area around the trailhead before another trail user found Rogers’ body and called police.

According to court records, Migliaccio made a plea agreement in Juneau on Wednesday in trespassing and harassment cases. But it’s not clear if or when Migliaccio was in custody before Thursday’s arrest, and Juneau police declined to say if he was arrested at Lemon Creek Correctional Center.

The Juneau Police Department has released very few details in the two months since Rogers was found dead close to the popular trailhead, where she had been walking her dogs. In the days following the incident, law enforcement officials warned residents to be cautious and vigilant while in the area. According to the charging documents, Migliaccio told police that he lived in the woods along the trail.

Rogers’ body was sent to Anchorage for an autopsy, scheduled for a few days after her death. No information about how she died was released before the charging documents, which say Rogers bled to death from a stab wound to her neck.

Migliaccio is being held at Lemon Creek Correctional Center on $500,000 bail. According to the Juneau Empire, he appeared remotely in court late Friday morning, where he pleaded not guilty to the murder charge.

This story has been updated with information from the charging documents. 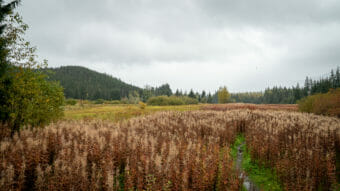