Alaskans are still waiting for the final outcome of races after the recent general election. But there’s no doubt about who Juneau voters picked as their winners.

KTOO’s Chloe Pleznac spoke to Juneau Empire reporter Mark Sabbatini about his recent article breaking down how capital city voters differed from the rest of the state.

The following transcript has been lightly edited for clarity. In the audio of this interview, Klukwan is misidentified as Klawock.

Chloe Pleznac: So we won’t know final statewide election results until the 29th. But in Juneau, do we have a pretty good idea which statewide candidates came out on top among local voters?

Mark Sabbatini: We do. It’s fairly clear at this point that Mary Peltola was the dominant choice among Juneau voters. She’s got 48% statewide, which means she’s gonna need to probably rely on ranked choice voting. But here in Juneau, she’s got 75% of first choice votes among District 4 — downtown and Douglas voters — and 62% of those voting in District 3, which would be the Valley and some of the outlying communities like Skagway, Haines, Klukwan and so on.

Chloe Pleznac: So Walker did better than Dunleavy here. But he also did far better relative to Gara than he did elsewhere. What do you make of that?

Mark Sabbatini: Well, again, it shows that Juneau as a whole tends to vote more liberally than the state as a whole, because Dunleavy’s the one candidate statewide who’s got an outright majority of first choice votes as of now. He’s got 51%. His two main opponents, Bill Walker and Les Gara, combined are at 44%. So that’s the statewide numbers. But you look in Juneau, and in the Valley, which is the most conservative area in District 3 — he trails Walker there, basically 38% for Walker to 35% for Dunleavy. Gara is about 11 points behind that at 24%. But then you look downtown and Douglas in District 4, the governor is actually in third place, and he trails by a lot. Walker has 46% of District 4 voters. He’s trailed by Gara at 28%, and Dunleavy at 25%. So he was certainly not popular where the governor’s mansion is actually located.

Chloe Pleznac: There was some redistricting this election cycle. Did we see that influence vote counts?

Mark Sabbatini: Well, the redistricting process that both redefined the numbers for Juneau’s two districts also added some communities to the new District 3, which was largely the Mendenhall Valley area. They now also have Skagway, Haines, Klukwan and the outlying Northern Panhandle communities. And what we saw was while that district is still more conservative than the district that encompasses downtown, Douglas and the Lemon Creek area, those outlying communities generally did vote considerably more liberally than the Mendenhall Valley areas did. I believe it was out in Klukwan you had Murkowski get 80% of the vote in that precinct, whereas she and Kelly Tshibaka are essentially tied 43 to 43% statewide. And in the Mendenhall Valley district, Murkowski is still ahead, but it’s more of a 55 to 30% split rather than the 80% she got in some of the most favorable Northern Panhandle communities.

The other thing that was interesting is, and you see this both in the outlying communities and in Juneau, it isn’t always consistent. Up in Haines, there’s two precincts and they’re fairly split actually, one considerably more liberal than the other. So generally, adding those communities to District 4 made the numbers more liberal than in the past, but it’s not consistent across the board.

Chloe Pleznac: Alaskans seem to agree en masse against a constitutional convention, with about 70% of statewide voters voting against holding one. How did Juneau residents vote on this issue?

Mark Sabbatini: Well, Juneau residents both in District 3 and District 4 were decidedly more against the convention than people statewide. As you noted, the statewide numbers were about 70% to 30%. In the District 3, or Mendenhall Valley and Northern Panhandle communities, it got rejected by a 75% to 25% margin. District for downtown, Douglas and Lemon Creek, it was a landslide rejection. Numbers were like 86% against and 14% in favor.

Mark Sabbatini: That was definitely not a close race. Sara got about 80% of the vote, Darrel got about 20. And he admits he really wasn’t much of an active campaigner. He made very little efforts during the initial last stage of the campaign. Towards the end he put out some fliers and had a website, but he admitted he was simply on there to give people something to check off on the ballot if they didn’t want to vote for the incumbent.

Chloe Pleznac: Thank you for taking the time, Mark.

Mark Sabbatini: Thank you for having me. 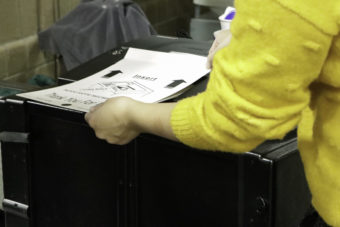 The Alaska Division of Elections has tens of thousands of ballots waiting to be counted, with potentially thousands more on their way in the mail.