State health officials are urging Alaskans to get flu vaccines and take other protective measures as case counts increase rapidly across the country.

States in the southern half of the Lower 48 have the most flu cases right now. But in a public health presentation Wednesday, state epidemiologist Dr. Joe McLaughlin said the wave is expected to reach Alaska in the coming weeks.

“We’re seeing very high rates of increase of influenza-like activity in the nation, and it’s occurring much earlier than it has in recent years,” he said.

“Most people who get an RSV infection will have mild illness and will recover within one to two weeks, but some people do get very sick and require hospitalization,” he said.

There’s no vaccine for RSV, but a monoclonal antibody treatment is available for at-risk patients.

Both RSV and the flu are already straining regional hospital systems. Flu-related hospitalizations among children are currently at levels not usually seen until late December and early January, according to data from the CDC.

Gene Wiseman is the Division of Public Health’s section chief for rural and community health systems. He said staff shortages and the early rise in RSV and flu cases are already impacting hospitals’ ability to transfer patients out of state.

“Region IX and Region X, which are our neighboring states — Region X being Idaho, Washington and Oregon — are all at capacity as well in their hospitals,” Wiseman said. “So although they’re a normal pop-off valve for some of our sicker patients here, we’re finding that we’re needing to hold patients in Alaska.”

While some transfers are still happening, Wiseman said, there are “extreme limitations.”

Health officials stressed the importance of getting kids vaccinated against the flu and COVID. Annual flu vaccines are available for kids 6 months and older, and according to health officials, it’s not too late to get one this year. 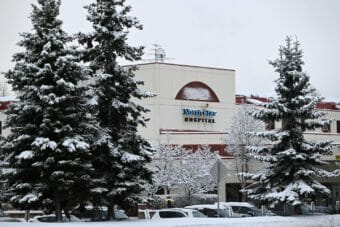