Members of Alaska-based Native Movement set up the blockade after work began on a road leading into the agricultural project, located in the Interior just west of Nenana. The activists want state officials to reconsider their plans for both the road and agriculture project.

“The state is proposing to expand a road through Nenana traditional territory, hunting and fishing grounds,” Fairbanks Native-rights advocate Enei Begaye said in a Facebook livestream from the scene on Oct. 31. “And it’s gotten to the point now where construction is about to start, and the tribe is out here blockading the road.”

Begaye is executive director of Native Movement, an Alaska-based nonprofit that promotes social justice and sustainability through Indigenous environmental practices. Members of the organization and their local allies say the state hasn’t fully consulted with local tribal and community members. And they say it’s moving too quickly to develop the 140,000-acre Nenana project.

So they blocked the road leading into the project just as the contractor apparently was about to begin work.

State officials say they’ve been planning to develop the land for about 40 years and have held several public meetings during that time. They say it’s now time to move ahead on the project, which they say will improve Alaska’s food security. The state Department of Natural Resources auctioned the first 2,000 acres of agricultural land this summer, and it’s planning a second sale within the next couple of years.

But local tribal and community members say the state’s approach to developing the agriculture project is a form of industrialized farming that will deplete the land and disrupt its ecology. They say the state should include traditional farming practices and uses for the land that don’t have such a large environmental footprint.

“The tribe asked Native Movement to organize and physically blockade the bridge before any equipment could be moved across to the road,” said Lindsey Maillard, an environmental justice coordinator with Native Movement. She and fellow members of the group and others from the Nenana Native Association and Village Council, participated in the blockade, along with members of the community.

Maillard said they wanted to prevent construction equipment from entering the area. But local residents were allowed to trap, cut firewood and other traditional uses.

“Anyone could go through, but we were just not wanting the equipment to make it to the other side,” she said.

“Our construction team was not on-site,” she said, “meaning, we weren’t crossing the bridge.”

Tessen said the activity the protesters saw was preparation for beginning work on the project by Brice, the Anchorage-based contractor that was awarded the $5.8 million contract to improve the 12-mile road into the Totchaket. A second phase of the project would extend the road another 19 miles to the Kantishna River

“Crews are mobilizing equipment,” she said, “and we’re working around the construction site at our material sites. Which is what we would do at the start of any construction project.”

Tessen said DOT and contractor representatives decided last week to delay moving ahead on the road project after meeting with local residents and tribal members to talk about their concerns.

“We’ve been taking time to really reflect on that conversation,” she said. “And we will be hosting another listening session that will be open to the public.”

Tessen said the meeting will be held later this month, and DOT’s still working on when and where it’ll happen.

Maillard said Native Movement would welcome more talks, and she assumes local tribal officials would be, too.

Tessen said officials with other state agencies involved in the project also may be invited. That likely would include the Department of Natural Resources, which is overseeing the agriculture project. DNR officials didn’t respond to requests for comment Thursday. 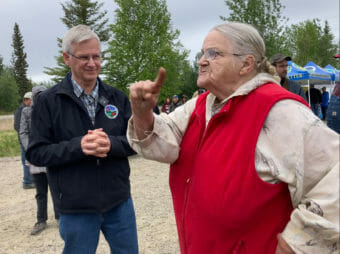 They say the state should talk further with local residents and complete studies on the project’s soils and resources before continuing the sales.