Alaska voters will be answering a yes-no question in the general election next week: “Shall there be a Constitutional Convention?” While the pro-Convention side has emphasized putting the Permanent Fund dividend in the constitution as the top motivation, those opposed to the convention also see abortion rights as an issue at stake.

The right to have an abortion in Alaska is protected under the Alaska Constitution’s privacy provision. This strong protection was underpinned by the U.S. Constitution’s protection of abortion rights. That is, until Dobbs v. Jackson Women’s Health Organization, when the U.S. Supreme Court ended the federal constitutional right to abortion, overturning Roe.

For some other conservative states – like Alabama and Kentucky – that June 24 decision meant an end to abortion rights and access. For Alaska, though, it didn’t.

Susan Orlansky, an attorney in Alaska since 1980, gave her view on why that is. She has represented abortion rights advocates in Alaska lawsuit.

“So there’s nothing about the Dobbs decision that undermines the protection of abortion rights in Alaska right now. But it sets the stage for efforts that are possible now that would not have been possible while Roe v. Wade was alive and well, for people to try to change the Alaska Constitution. And if people were successful in changing the Alaska Constitution, so that it didn’t recognize a right to abortion any more, then everything about abortion rights in Alaska could change,” she said.

Holding a convention would set the stage for making that kind of change.

The argument in favor

Those who want to see changes to the constitution aren’t talking primarily about abortion.

Convention supporters instead point to putting the Permanent Fund dividend in the constitution, as the main reason to hold a convention. After decades of being paid out under a formula in state law, in recent years, lawmakers have negotiated the amount. And some Alaskans aren’t happy about it.

ConventionYes, a group of conservative Alaskans, organized Stop the Steal rallies around the state on Sept. 20 – the day the state started distributing the dividend.

“On Sept. 20 PFD day, state legislators put on cloaks, snuck into your bank account and stole almost $1,000 from you and every member of your family,” said Jake Libbey in a narration for a video made by the group. Libbey is a publisher of the conservative Christian news site, the Alaska Watchman, and a member of the ConventionYes steering committee.

“We’ve had enough of this government theft and spending spree,” he said in the video.

“I think the No. 1 thing that has animated the most number of Alaskans and the reason why we are pushing so hard is the PFD,” Minnery said in an Oct 6 Must Read Alaska podcast.

Days after the U.S. Supreme Court overturned Roe v. Wade, Minnery noted in a phone interview issues other than dividends that he wanted to see taken up during the convention – school choice, the judicial selection process and “protecting preborn lives.”

“It’s not at all about making abortion illegal as now … it is in some states; it’s simply clarifying the neutrality of the state constitution,” he said.

In 2021, Palmer Sen. Shelley Hughes, a Republican, proposed an amendment to the Alaska Constitution. The resolution would have added a new section that said, “To protect human life, nothing in this constitution may be construed to secure or protect a right to an abortion or require the State to fund an abortion.”

It passed out of two committees but didn’t go any further. This is language that Jim Minnery wants to see taken up during a convention.

He said the court’s interpretation of the constitution that recognizes abortion as a fundamental reproductive right was “made up out of whole cloth.”

“We believe that the court has manufactured a right to abortion because there’s just simply no language whatsoever in the constitution to the privacy clause that obtains a right to abortion. And so we would just want that to be clarified so that then the people can make that decision as a state rather than unelected judges,” he said.

Other anti-abortion activists, including Bob Bird, have said the constitution should go beyond neutrality on abortion. Bird is a vocal spokesperson for having a convention.

“For me personally, it certainly would be an opportunity to try to convince the delegates that the unborn’s rights are recognized in the current constitution,” Bird said. “I’ll read it here. ‘This constitution is dedicated to the principles that all persons have a natural right to life.’ And then it says ‘liberty and the pursuit of happiness.’ So right there, that’s sufficient for me, if the unborn are seen as persons before the law.”

Bird said personhood, which he views as from conception to natural death, should be defined by elected representatives, instead of judges.

Currently, when appointing judges, the governor must choose from a list of two or more nominees compiled by the Alaska Judicial Council. It’s an independent state commission.

“I think the Judicial Council is just now beginning to exceed the PFD as a motive to get people to vote yes because that’s a rigged system. It’s got to go,” he said.

A constitutional convention could be a first step to banning or limiting abortion access by changing how judges are chosen.

“I would say that pro-lifers understand very well that the Judicial Council is a tool that can help restore human rights to the preborn,” Bird said.

Bird is also chairman of the Alaskan Independence Party, which is “a pro-gun, pro-family, pro-life, pro-strict-interpretation constitution party.” The Alaskan Independence Party wants Supreme Court vacancies to be filled by governor appointment and confirmed by the Legislature. There would be no Judicial Council. That’s according to a draft of a new Alaska constitution the party wrote.

The draft also says that the judicial branch would be the least influential of all branches of government, its decisions only as effective as the willingness of the governor to enforce them.

Opposed to both abortion and constitutional convention

“I’m a pro-life guy, I unashamedly have been a champion of pro-life issues for a good long while,” he said.

Coghill was an Alaska legislator for 22 years. He was behind the 2014 bill that tried to limit Medicaid funding to only cover abortions deemed “medically necessary” by the Alaska Legislature. Agreeing with a lower court, the Alaska Supreme Court struck down the law in 2019, saying it violated the equal protection guarantees of Alaska’s constitution.

“Every year I did something to protect the life of the unborn. Every year,” he said.

But Coghill opposes a convention. His father, the late Jack Coghill, was one of the original delegates to sign the Alaska Constitution.

John Coghill, who’s on the executive committee of the group Defend Our Constitution, said he doesn’t want to open it up and thinks a change to abortion rights wouldn’t pass. He understands why anti-abortion advocates want a convention though.

“Most of us who are pro-life, we will fight to the death to save the life of the unborn because they don’t have a voice. And so most of my friends who carry the same position I do, they are willing to fight and lose because to them the fight is worth it,” he said.

Not only would they lose the anti-abortion fight, Alaska could lose its constitution, Coghill said. At a convention, delegates have what’s called plenary power, or as Coghill put it, the whole constitution is on the table and open for discussion. That means it could be totally rewritten.

“So to me, I would fight for a right-to-life issue. But do you think I’m willing to change the whole constitution (or) our whole economic structure to get that? Some people say, ‘I’d be willing to do that.’ But I think there are other days we could fight without changing the structure of Alaska,” he said.

On the same side

Being against having a convention puts Coghill on the same side as lots of people he’s not used to siding with, like Rose O’Hara-Jolley, Alaska state director for Planned Parenthood Alliance Advocates.

“We are absolutely encouraging people to vote no on the constitutional convention” O’Hara-Jolley said.

To Planned Parenthood, a convention would mean the end of abortion access. It could also mean the erosion of other rights. So O’Hara-Jolley said they’re worried about the ballot question.

“If I’m being honest, I am, I believe that if everyone truly understands what a constitutional convention would mean for abortion access, for LGBTQ rights, for labor rights, for public education, I think then, it’s very obvious to everyone that causing that instability and so many places and all of our lives is not worth the risk,” they said.

Not in their capacity as state director for Planned Parenthood Alliance Advocates but as an individual, O’Hara-Jolley is chair of the group, “Protect Our Rights: No on 1,” which has volunteers door-knocking and phone calling “talking directly to voters and explicitly around abortion.”

In their free time, O’Hara-Jolley said they also talk to friends and acquaintances about why people should vote no on the convention. Not everyone immediately agrees with O’Hara-Jolley.

“Especially my younger friends are like, ‘Well, yeah, our government’s broken. You know, and our Constitution was written, you know, mostly by white people who were actively colonizing a place that was not ours, is not ours,’” they said.

While O’Hara-Jolley agrees that it would be great to have conversations about how Alaska can be a better state, they tell these friends that a lot of how the convention will run will likely be decided by the Legislature.

“And usually immediately when I say that people are like, ‘Wait, what?’” since the same people in a government voters said is broken would be the ones to decide how the convention is structured, O’Hara-Jolley said.

“Yes, we will vote on delegates, but think about who your elected official is right now, right? They’re voted into office. So who’s going to have the resources and the ability to run to be a delegate and then give that time to be a delegate, you know, and that’s gonna look like a certain kind of person. And so it’s not some great, like, statewide shared Google Doc where everyone has equal input,” O’Hara-Jolley said.

Instead, they said, delegates proposing changes to the constitution will likely be people who are already in positions of power.

The people working to affect the outcome of a convention may include John Coghill. Though he opposes the convention, if the ballot measure passes, he said he will be on the anti-abortion-rights side, back with the people he’s used to siding with.

“If the people of Alaska choose to put the constitution on the table in a convention, I am going to be with Jim Minnery voting for and trying to help us get the best pro-life principle in our constitution that can possibly be had,” Coghill said. 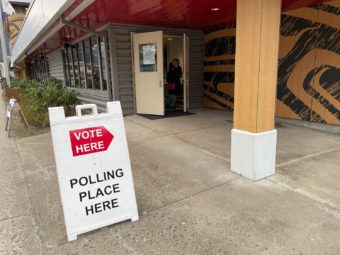 At a convention, the state constitution may be amended or revised, subject to approval by the voters. 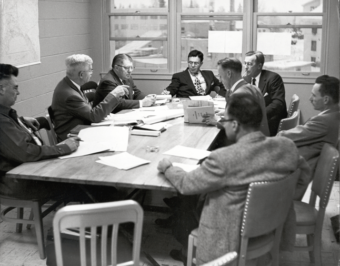 Alaska is one of 26 states that picks judges through a council. Here’s why some voters want a change

When the framers of Alaska’s constitution were debating how the state should pick its judges, the goal was to remove politics from the process as much as possible. 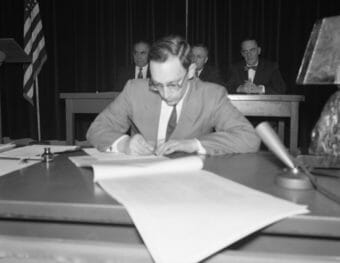 In Alaska, the constitutional convention question usually gets voted down by a wide margin.