People who live in Cooper Landing and Moose Pass take a little extra care when they stockpile their firewood for the winter — because they know they’re going to be judged.

At this year’s fifth annual Cooper Landing Woodpile Contest, competitors in both Kenai Peninsula communities had a chance to show off their wood-stacking creativity in front of three judges, who traveled from home to home judging the piles in a number of categories.

Sandra Holsten was one of this year’s judges, along with Mary Story and Katie Feichtinger.

“The intention of the contest is to highlight people’s creativity with their cut firewood — which of course we have gobs of this year,” Holsten said.

That surplus of firewood is a result of the spruce bark beetle outbreak, which has been severe in the Cooper Landing area and has required residents to take down many of their damaged spruce trees.

“No matter how big or how little, anyone who has a woodpile is proud of it because they always take a lot of work,” Yvette Galbraith, the organizer of the competition, said. Galbraith said the winner receives a “Best Woodpile” plaque to display for the year, which was made by a woodworker known as Rabbit who passed away two years ago.

This year, there were 11 contestants who showed off their firewood finesse in categories including wood quantity, storage, accessibility and stacking creativity. The judges award points in each category to rank competitors.

Then there are the bribes. In this competition, bribing is not only allowed — it’s encouraged.

“Bribes can include anything from a beautiful jar of raspberry jelly, blueberry tarts, or alcohol,” Holsten said.

The judges can exercise a good deal of discretion when choosing a winner, and the bribes count for a lot. Holsten said she received a number of delicious treats and beverages from competitors.

“Well, there was a wonderful blueberry Bailey’s coffee drink over in Moose Pass and that gentleman, incidentally, got second place,” she said.

When it came to first place, judges say it was woodpile supremacy that put one competitor over the top. Gary Galbraith of Cooper Landing — the husband of contest organizer Yvette Galbraith — arranged his woodpile into the shape of a giant face with ears and eyes, even using brush to create a wooden beard.

Jim Janssen of Moose Pass came in second with the tallest woodpile — and of course, his delicious bribe. The third place winners were a young Cooper Landing couple who are new to the area, Patrick McCartney and Sophie Koveleski, who Holsten said created a woodpile full of subtle touches.

“They came out and they were dressed like woodcutters, and of course they had a good bribe as well,” she said.

Galbraith, the first prize winner, won a brand new Stihl chainsaw for his pile prowess, donated by Craig Taylor Equipment of Soldotna. Taylor has been providing a chainsaw to the winner for three years now.

Holsten said one of the most touching moments of the contest was when Galbraith donated the chainsaw to the second place winner.

She said another standout of this year’s competition was the participation from a handful of residents of Moose Pass.

“In Cooper Landing, we think of Moose Pass as kin, if you would. Family,” she said. “There’s so much that goes back and forth that we were really, really happy to see them participating this year at that level, and hope we’ll get more.”

Of course, the judges are the real winners of the contest, since they’re on the receiving end of the bribes. Holsten said she and the other judges were supposed to take only two hours visiting the woodpiles, but ended up taking five because of how much fun they were having.

Editor’s note: Sandra Holsten is a board member of KDLL. 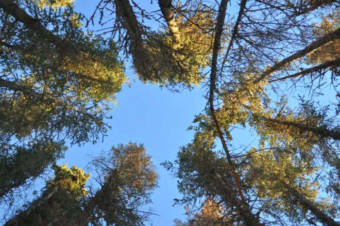 Soldotna is waiting on a federal grant to remove beetle kill trees that could fall and pose a fire risk.