Nick Tom points across the waterlogged tundra where Newtok stands.

“The flood was all over this whole area,” he said.

Tom, who manages the village’s corporation store, said flood waters from the remnants of Typhoon Merbok shifted the boardwalks in the village and partially submerged the community’s two giant fuel tanks.

“Everything is so outdated, and there’s so much fuel. It’s just unsafe,” he said.

Smaller fuel barrels were tossed around, and at least one leaked. The Alaska National Guard was in Newtok a few days after the storm. While in the village, they removed nearly 900 pounds of debris, but there’s still garbage scattered everywhere.

Newtok is among more than 40 communities in Western Alaska affected by the storm. The Alaska Native village has garnered years of national media attention as severe erosion and melting permafrost cause a wide range of serious public health problems. The storm in mid-September has heightened the race to relocate the roughly 200 people still in the village to higher ground.

Melting permafrost and severe erosion have plagued the community for decades. The most recent storm brought waves so fierce, the water claimed roughly half of the 80 or so remaining feet of land that stands between the back end of the school and the edge of the Ningliq River.

Twenty years ago, Newtok residents decided to move to a new location on higher ground. It’s on Nelson Island, nine miles south across the river. To date, only about 70 people have relocated to Mertarvik. The other two-thirds of the population remains back in Newtok. The relocation effort is slow going, complicated by local politics, funding gaps and geography.

But Tom said the storm highlights how serious this situation is.

“It’s about safety,” he said. “It’s about our future. [Nelson] island is the only safe place for our next generation to survive.”

Not too far from the damaged fuel tanks, Janette Stuart hangs bright red and purple bed sheets on a clothesline outside her house. She has a 2-year-old son and a 1-year-old daughter. Her house is about the size of a shipping container, with plywood walls that are gray with age. The house sits above the ground on pilings, but floodwaters from the storm still rose high enough to leak inside. She worries about her kids.

“It’s so moldy, and I want them to live in a bigger house where they could run around,” Stuart said.

The new townsite at Mertarvik is visible from the Ningliq’s banks in Newtok. To get there, Newtok residents have to take a half-hour boat ride across the river, where the new community is slowly growing. It sits high on a tundra-covered, treeless hillside. There’s a huge gravel boat landing and two rows of colorful houses line the brand new road.

“It was sure very windy, it was the strongest winds we had,” she recalled. “It shook my house here and there a little bit and crashed my plants.”

In the summer she grows marigolds from seed outside. She said they fared OK in the storm.

No one grows flowers outside in Newtok. And the difference in how the two communities weathered the storm is stark. Mertarvik stayed dry. There was no structural damage, no boats or snow machines destroyed, and there is no storm debris littering the ground.

Nick Tom said it could be at least five years before most people fully relocate. Newtok is running out of time, he said.

“If we keep having this weather, we have more erosion,” Tom said.

The fall storm season is only beginning in Western Alaska, and Tom said that’s why it’s so urgent to get all of Newtok’s residents to higher ground. 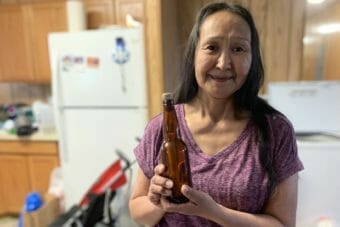 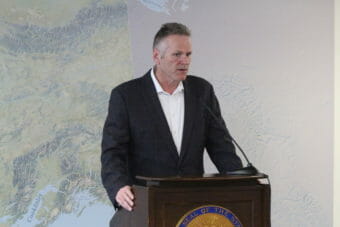 The declaration would make federal funding and support available for recovery efforts. 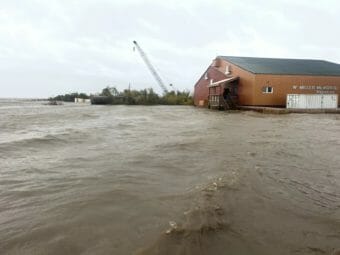 Although no school interiors flooded, there was significant erosion in some communities that brought the buildings much closer to the shoreline.