Community members in the small town of Whale Pass on northern Prince of Wales Island are fighting against the state’s plan to clear-cut nearly 300 acres of old-growth timber — including some within city limits. They’re concerned the clear cuts could hurt the town’s tourism industry and make landslides more likely, and time is running out to stop the timber sale.

Staff from the Alaska Division of Forestry received backlash from Whale Pass residents at a recent informational meeting in Whale Pass.

“I didn’t work 20 years out of my life to have everything I built destroyed,” one speaker said.

“I find it amazing that you put the economic future of the town, you know, at risk for 292 acres of crappy timber,” another attendee said.

Twenty of Whale Pass’ 100-some residents spoke at the Sept. 26 meeting, with all but two condemning the division’s plan to sell almost 300 acres of old-growth timber. The sale’s boundaries push up against homes and would leave the surrounding hillside clear-cut and barren.

Jimmy Greely lives on that hillside. He’s voiced his opposition to the sale before.

“We’re (Whale Pass residents) all basically against it,” Greeley said.

He looks out his kitchen window and sees orange ribbons marking the edge of the parcel slated to be clear-cut just 100 feet from his property line. He thinks it’s too close.

Greely said residents worry about what a bare hillside means for their safety.

“That concerns us with change of the water,” he said. “Water flow coming down the hill, the potential (of) landside, the wind coming from the north — the trees that are there now kind of give us adequate wind blockage.”

Others who attended the meeting worried about impacts to traffic flow on Whale Pass’ main roads, or damaging fish habitat. Some took issue with the idea of noise pollution so close to their backyards. There’s also murmurs of concern about what could happen to Whale Pass’ visitor industry without the scenic attraction of the trees.

Greely said that Whale Pass attracts visitors with a ‘do-it-yourself’ attitude drawn to staying in a cabin and taking themselves fishing.

“Basically, it would clear cut the whole hillside and kind of make Whale Pass not look very, very green anymore,” he said.

Greely is a member of the homeowners’ group Friends of Whale Pass. He helped draft a resolution passed by the Whale Pass City Council officially asking state forestry officials to push the boundaries of the sale back by about 400 feet.

Greely said the resolution asks the state to take a second look at potential environmental impacts. The Division of Forestry’s best interest finding showed there shouldn’t be substantial harm caused by the sale.

“So we’d like just to see them (do) a little bit more due diligence instead of just kind of pushing it through,” he said.

Whale Pass’s city clerk, Randy Toman, said he sent a copy of the resolution to the state’s Department of Natural Resources. He also said he’s been in touch with representatives from Gov. Mike Dunleavy’s office.

“We are throwing everything at this we can, realizing it is a Hail Mary, but our people here need to see we are doing everything possible,” Toman said.

An environmental policy analyst from the Southeast Alaska Conservation Council was one of the people who spoke out against the sale. Katie Rooks told KRBD she’s not even sure why the state wants this particular timber. She said the trees in the area are known to have a lot of imperfections.

“They’ve overlooked the fact that the economic damage to an entire community will reach far higher numbers than any potential benefit of the sale,” she said.

She told state forestry officials that they’re going about the sale wrong — taking too much at once and too close to homes.

“They’re going to kill a town,” she said.

State authorities downplay the risk of landslides following the clear-cut. State forestry officials say bedrock in areas above Whale Pass is relatively close to the surface, and that makes landslides unlikely.

And the state’s best interest finding says that helicopter logging — which could preserve some of the scenic views above Whale Pass — would be expensive and impractical.

Viking Lumber, Southeast Alaska’s last remaining mid-size sawmill, is expected to bid on the sale. The company and the Alaska Forest Association submitted comments supporting the Whale Pass sale this spring. They say it’ll be good for the island’s economy.

Southeast Alaska Area Forester Greg Staunton told KRBD that the value comes from the mix of wood — red cedar, yellow cedar, western hemlock and Sitka spruce are all part of the deal.

“It is a merchantable volume, and from our analysis it would be economical to harvest in our present climate, and part of that has to do with the species mix that was on the site,” Staunton said. “So the defect in the stand is notable, but it’s not abnormal for an old growth stand.”

Staunton said his department is aware of the strong opposition to the sale and welcomes more public input. He said there’s no bad blood between the state Division of Forestry and Whale Pass residents.

“You know, if people want to talk to us, we’re available and we make an effort to do so,” Staunton said.

The division is taking public comment on the plan through mid-October. Comments can be emailed to greg.staunton@alaska.gov or mailed to the Division of Forestry until Oct. 17. 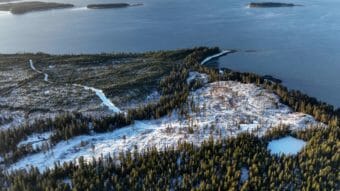