One afternoon in early September, Dan Bonser walked up the stairs in Dillingham’s middle-high school to Room 200. It’s the middle school science room — where his family sleeps.

“Some of our bedding is over there. And then the first two totes over there — food,” he said pointing across the classroom.

There was a lot of turnover in the Dillingham City School District last spring. The district hired 22 new staff members for this year — a quarter of the entire staff. Unable to find homes in town, some are living at the school.

Bonser moved from Oklahoma to Dillingham last month with his wife, Lisa. Their daughter, CJ, also moved with them and is an instructional aide for the special education program. The family lives in Room 200 with their two cats, sleeping on air mattresses.

Bonser said the first few weeks have been tough.

“I’ve done a lot of different jobs in my life. And I’ve never been this exhausted,” he said. “It’s a lot.”

Dillingham’s housing shortage is acute, but it’s not unique. Across the country, people are struggling to find places they can afford to rent or buy. In Alaska, the average home sales price jumped almost 9% last year. And in rural communities, the problems are compounded by the costs of shipping in building materials and the lack of construction workers and contractors.

“The common thread is — tight housing market, rising sales prices and limited availability. And that’s home buying,” said Rob Kreiger, an economist with the Alaska Department of Labor. “On the rental side of things, broadly speaking, rent’s way up, vacancy rate’s way down, which suggests a tight rental market, as well as a tight home buying market. And that’s pretty much consistent throughout most of the areas that we have data for.”

Kreiger said the state doesn’t have a good handle on what the rental market is like in rural parts of Alaska. But in general, housing prices are high, and there are few homes for sale in rural areas.

“I think you have those two factors,” Kreiger said. “I think that would probably sum it up for most of the kind of larger rural hubs as well.”

Bonser said when they were offered the teaching jobs, the school district said it would help them navigate the search.

“We have a bead on one house, but it needs to be connected to the sewer, and there’s not enough plumbers to get that done and the homeowner’s been waiting a long time for that to happen anyways,” he said.

The school district’s new human resources director, Lindsay Henry, was able to find a place for herself and her dog. She said other new staff were able to find housing, too. But it’s tricky when newcomers aren’t familiar with the state.

“I think what is difficult for people who are coming who don’t have a familiarity with Alaska, is that they hear about people working in the bush. And in most of those bush communities, they do provide housing, and Dillingham is kind of unique in that it’s a Class A city and we don’t have to provide housing for teachers,” she said.

Henry said the district tells staff that housing is a challenge and tries to help them find something. Officials can send teachers phone numbers and the names of landlords in town.

“But we can’t take on that liability or responsibility of actually negotiating housing for them. So it’s a challenge in many ways,” she said.

It’s also competitive. Henry points out that a lot of organizations in Dillingham hire people from out of town and need housing for them. That includes the hospital, Fish and Game and the university.

The housing shortage in Dillingham is intertwined with a national shortage of teachers. Other schools have turned to teachers from other countries through the J-1 visa program. But that program also requires a plan for housing.

Dillingham’s new superintendent, Amy Brower, spent five weeks staying at the school before she found a place to live. At a recent school board work session, Brower said there were several candidates who turned down job offers because they couldn’t find anywhere to stay.

“We had some really good, high-quality candidates that wouldn’t come because of housing,” she said. “So we’re at a point where, with the number of teachers that are not out there — and I said not — and the quality of teacher that we’re looking for, we’re going to have to find some way to do something to help get them here.”

The administration is working with the fish processor OBI Seafoods to rent out crew quarters during the year. Brower said the school is working with the City of Dillingham to find long-term solutions as well. The district has discussed applying for grants to build new housing units or renovate existing ones. That could include an Alaska Housing Finance Corporation grant, which would allow a company to build housing teachers could then rent out.

Until then, some teachers will continue to search for a place to sleep — outside of the classroom. 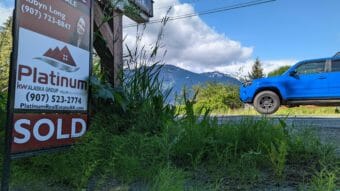 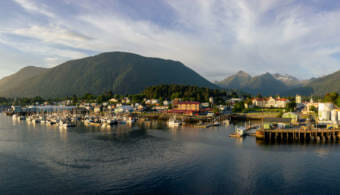 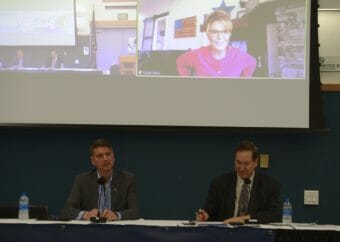 In Ketchikan, Gravina Island is now seen as an opportunity for affordable housing.