The busy cruise ship town of Skagway is looking for a solution to the rockslides that continue to pepper its largest cruise ship dock. It also hopes to prevent a major rockslide that experts are calling inevitable. And as winter approaches, the window to execute a workable solution gets smaller and smaller.

The forward berth of the town’s largest cruise ship dock was shut down earlier this summer, about a week before a large slide hit the area. The town has been operating only three out of four berths ever since. That’s resulted in the loss of about 125,000 passengers this season.

If the community wants to return to hosting four ships at a time in 2023, it has less than seven months to fix the problem.

“It’s a complicated issue, and time is not helping,” he said.

He said there are about 40,000 – 60,000 yards of rock that need to be moved off the mountainside to prevent both major and minor rockslides. The process would involve mechanically removing the rock, lifting it up over the top of the hillside and depositing the material out of the way of the view shed of Lower Dewey Lake, then repeating the process down the slope until it is completed.

Brennan says there are two problems. One is the ongoing smaller rockslides, of which there have been several over the past few weeks. The other is the large unstable mass at the top of the slope that he says will eventually release and destroy the area below the slide zone — and potentially much more if left untouched.

“What we’re trying to do is twofold. One, remove this very large hazard. But also, by doing so, we should greatly reduce the amount of rock fall that’s produced along the slope because we no longer have that moving rock mass,” Brennan said. “The rock fall hazard will never go away completely because you have a steep rock slope, and steep rock slopes over time generate rock fall occasionally, but the frequency of those rockfalls should be reduced dramatically.”

The most recent calculations say that the large rock mass is separating from the mountainside at a rate of 2.5 inches per year, up from between 1 and 1.5 inches just a few years ago.

Brennan said his firm will have preliminary design plans for mitigation completed by Sept. 16. Without those, permits can’t be applied for, grant proposals can’t be made and a contractor can’t be hired. But even if those plans are ready by mid-September, it’s not likely that permits would be approved before mid-winter.

“If we can get that contractor on early, you know, there are certain components of the project that maybe they can start that don’t really rely so much on the permitting: staging equipment, establishing access, maybe doing some work to prep the upslope disposal site for the rock,” he said.

That may include improving road access to Lower Dewey Lake to get large excavators and dump trucks to the construction site.

“Any suggestion of a helicopter getting a 70,000-(pound) excavator up that mountain seems completely impossible to me,” Hanson said.

And without helicopter-assisted access, road work would need to begin before the winter freeze.

“You’re saying we can’t really do any excavation until sometime in the winter. We have to mobilize well before that if we have any chance of pulling this off before next year,” Hanson said.

For now, the company is only focusing on the north slide area above the railroad dock. Project cost estimates and funding options were not discussed in detail. 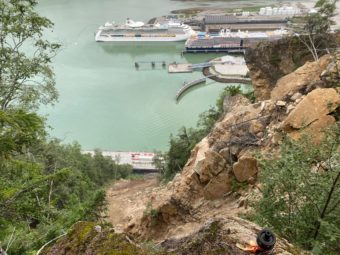 Skagway's mayor says the city needs to do something about the slides so it can get back to the full load of cruise ships its economy depends on. And that needs to happen fast.