The Matanuska-Susitna Borough School District will no longer allow transgender students to use communal bathrooms and locker rooms that match their gender identity.

At a meeting Wednesday night, the school board suspended a policy that allowed transgender students to use bathrooms and locker rooms of their choice. The board voted to suspend the policy in a 5-1 vote.

The board’s policy committee suggested the change after a parent contacted the board about a transgender girl changing in a high school girls’ locker room.

In July, a federal judge temporarily blocked the Biden administration’s Title IX guidance prohibiting discrimination based on gender identity in schools. The school board’s policy committee cited that order in its request to suspend the district’s bathroom and locker room policy.

Dozens of people attended Wednesday night’s meeting. All 27 who spoke were in favor of suspending the policy. Some parents — like Sher Morrison — said they were concerned about girls’ safety and privacy.

“I am appalled at the district’s transgender student policy,” Morrison said. “This policy takes my daughter’s rights from her in order to give male students extra privileges.”

Others cited religious beliefs and denied that gender identity could be different than biological sex. Some parents brought up similar arguments in June, when the board approved a policy banning transgender students from girls’ sport teams. Throughout the meeting, board vice president Jim Hart asked attendees to refrain from applauding the speakers.

Student representative Vanessa Schachle argued that suspending the policy would invade students’ privacy by requiring students to disclose or prove their biological sex.

Member Dwight Probasco was the only no vote. He said he wanted to ensure that transgender students had an alternative — such as a gender-neutral bathroom.

“Probably less than 2% of our student population is transgender children, and we have to protect them also,” he said. “So I will be voting no on the suspension tonight.”

Under the new policy, transgender students can still opt to use individual bathrooms rather than communal ones. 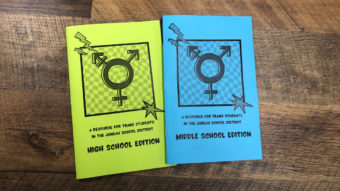 Transgender youth face challenges in school that most students don’t — like finding a gender-neutral bathroom or asking to be called by a different name.