The top runner-up in Alaska’s top-four primary election for governor is calling for No. 4 finisher Charlie Pierce to either publicly deny an unconfirmed workplace harassment claim against him or withdraw from the race.

“Today I am appealing to Charlie to either step up and fight back against any false salacious attacks that have been made against him; or conversely salvage his remaining dignity, resolve to yield the field before the Sept. 5 deadline, and let his conservative supporters know that he is endorsing the Kurka/Hueper campaign going into the general elections,” said Christopher Kurka, a Republican state representative from Wasilla and a candidate for governor.

If Pierce and his running mate, Edie Grunwald, withdraw by the end of the day Monday, Kurka and his lieutenant-governor candidate would take their place.

By text message, Pierce said he and Grunwald are not dropping out of the race.

“And I have no comments related to Kurka,” he said.

Last week, Pierce said he would resign as mayor of the Kenai Peninsula Borough in order to focus on the general-election campaign for governor. Three days before Pierce’s announcement, members of the local Borough Assembly were briefed on the result of a secret legal investigation that occurred earlier in the summer.

The political website the Alaska Landmine has claimed that investigation involved a workplace harassment situation between Pierce and a borough employee.

Pierce, members of the Borough Assembly and borough employees have not denied the claim, saying only that they are unable to discuss it because of confidentiality rules.

Grunwald said she doesn’t know the details of what happened in the Kenai and said she will fulfill her obligation as his running mate.

“I talked to him last night, and he said he’s in the race and he’s going to campaign. We’re going to do our best,” Grunwald said.

“I mean, this may sound cliche, but I’ve made a commitment, and I need to fulfill my obligation to the voters and the donors and Alaskans,” she said.

“If anything,” she continued, “if things go forward, it gives Alaskans another option. If not, well, then it’ll fall out how it falls out. Sometimes these election things, you don’t really know what’s behind the scenes.”

On the same day that Kurka urged Pierce to act, Eagle River Republican Sen. Lora Reinbold withdrew her endorsement of Pierce’s campaign, saying that “a number of issues have surfaced regarding candidate Pierce.”

Reinbold was Pierce’s lone major endorsement of the ongoing governor campaign, as most Republicans have backed Dunleavy. She declined to say whether she believes the claim against him but said she continues to support Grunwald.

Kurka, who has called Dunleavy insufficiently conservative, suggested that Pierce may seek to stay in the race and run an unserious campaign in order to help Dunleavy.

“If Charlie doesn’t intend to run a serious campaign, he still has time to honor the wishes of his supporters who want a conservative alternative to Dunleavy. That is of course assuming Pierce has not duped his supporters, and has been secretly working with Dunleavy all along,” Kurka said. 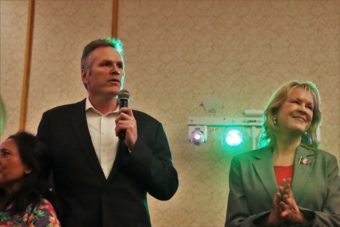