An Anchorage man arrested on manslaughter charges in the beating death of his father, a former state legislator, has now been indicted for murder.

Anchorage police arrested 36-year-old Tallon Westlake on Aug. 20 and charged him with manslaughter, which is an accusation that he “recklessly” caused the death of his father, 62-year-old Dean Westlake, who served in the state House representing Northwest Alaska in 2017.

But on Monday an Anchorage grand jury indicted Tallon Westlake on charges of first-degree murder — that is, for allegedly acting with intent in killing his father — and second-degree murder, under the alternate theory that he showed “extreme indifference” to his father’s life.

“Even when somebody’s arrested, the investigation continues in the case. It doesn’t stop,” Sears said. “And so, in this case, you know, between gathering evidence, medical evidence, police investigation just continued, and we just got more information.”

According to the initial charges, Dean had planned to evict Tallon from an apartment Dean’s girlfriend owns. A neighbor heard them arguing hours before Tallon called police to say Dean wasn’t breathing, and officers found Dean dead, with blood on the floor and walls, looking like he’d been “pummeled,” the manslaughter charges say.

Sears, the prosecutor, said grand jurors heard additional evidence gathered after Tallon’s arrest when they indicted him on Monday.

Dean Westlake served as a Democratic representative for House District 40 from January to December 2017, when he resigned amid accusations of sexual harassment. 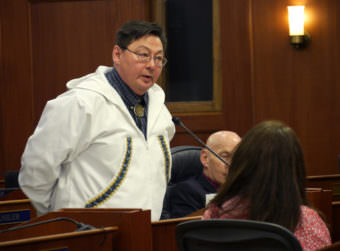 Early indications are that the father and son had fought over a rental dispute related to the South Anchorage apartment where Dean Westlake died.