A small ship graveyard is forming on the Kuskokwim River outside Napakiak.

During the last week of July, a landing craft sank while carrying construction equipment to Napakiak for work on the high school.

Bethel-based contracting company Jobs Done Right, which was operating the landing craft, then brought in a Homer-based Kachemak Marine to help salvage it. They sent a 20-by-45-foot barge upriver to serve as a work platform for salvage divers, who planned to attach lift bags to float the sunken landing craft.

The barge sank, too.

“I am sure that between the high waves, the high wind, and all the other things that could possibly go wrong, Murphy showed up and that was the end of it,” Brock said. “It sank that barge.”

Brock says it’s likely no one will ever know why the landing craft sank.

“I’m going to tell you that if you talk to 15 different people in the community, you’ll get 15 different answers,” Brock said. “What I’ll also tell you is that nobody has a smoking-gun, rock-solid explanation of why the landing craft sank.”

According to Brock, no one was on either vessel when it sank, and both have been secured to land and aren’t blocking river traffic. He says no fuel is leaking.

“We don’t see any environmental threat,” Brock said. “There is a very small amount of fuel that was released when the vessels went down, possibly less than a gallon, but a gallon looks like a lot of fuel.”

If there is oil in the water, the U.S. Coast Guard said that it would be Jobs Done Right and Katchemak Marine’s responsibility to clean it up.

Kevin Williams, a marine casualty investigator with the Coast Guard’s Anchorage sector, says there’s a lot they don’t know about the landing craft.

“We don’t know if the tanks were full or half empty, or if there was oil in the bilges in the engine room, ” Williams said. “The vessel name that was given to us is not even in our database.”

Brock, the salvage master, gave no timeline for recovery of the two vessels but said they’re constructing rigging to refloat the two boats. He doesn’t expect either to be damaged.

“We’re still in the middle of sourcing the equipment we need, but the short version is, we’re going to lift them up, refloat them, and take them and deal with them once they’re refloated,” Brock said.

Hale, the owner of Jobs Done Right, says the sinkings have not slowed the timeline of the school construction.

According to Sally Benedict, the site administrator for Napakiak’s schools, construction was supposed to be completed on Aug. 21. The school is still waiting to be hooked up to water and heat before they bring students back into the building. 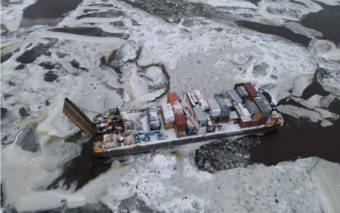 A freight company is leaving 2 barges to freeze in the Kuskokwim River: 'We had to get out of there'

The early freeze-up this year caught the company off guard.