The used aerial gondola system that Juneau officials bought for an estimated $2 million from a ski resort in Austria is on its way.

Kristen Strom, the marketing and events manager at Eaglecrest Ski Area, said workers in Austria finished loading the last shipping container with parts of the disassembled system on Friday. She said the system should arrive in Juneau in early September.

Eaglecrest General Manager Dave Scanlan has been sharing updates about the process from Austria, where he’s been overseeing the system’s disassembly and loading since June 26. In a written report last week, Scanlan told the Eaglecrest board that the final shipping bill may come in well under the quoted price of $845,000.

Scanlan is expected back in Juneau on Monday night.

Meanwhile, city officials are negotiating a design and engineering services contract with Northwind Architects for the gondola system. Northwind was the only firm to respond to the city’s contract request last month.

Scanlan said Northwind’s tentative timeline, plus the tight market for labor and materials, means the actual construction and installation would begin in the summer of 2023 and be finished the following summer.

More technical work must be done before Eaglecrest’s leadership can decide where specifically on the mountain the gondola will go. But the preferred path calls for a loading station at the current lodge, a midway station to load and unload near Cropley Lake, and a summit house on Pitman’s Ridge.

The ski area’s leadership thinks an enclosed lift of this kind will open up more terrain to winter users and let Eagelcrest expand activities in the summer. They say those summer activities will put the city-owned enterprise on a path to financial sustainability.

Under a revenue-sharing agreement, Goldbelt would contribute $10 million to the project and would get between 10-25% of gondola revenue. 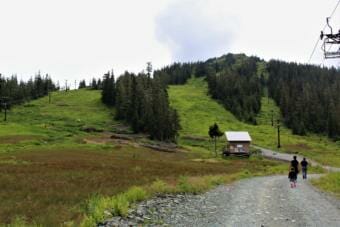 Goldbelt is interested in financing Eaglecrest's gondola and other expansion plans

City officials said Goldbelt Inc. is willing to put in up to $10 million for a slice of the gondola ticket sales. The particulars of a deal with Goldbelt would have to be negotiated.