The Race to Alaska — a 750-mile, engineless, unsupported boat race from Port Townsend, Wash., to Ketchikan — is back after a two-year hiatus due to the coronavirus pandemic.

First place wins $10,000 cash, which is nailed to a piece of wood in Ketchikan. Second place gets a set of steak knives. All that the rest of the finishers get is a sense of accomplishment and some good stories to tell.

There’s a new documentary out called “The Race to Alaska” that stitches those stories together to take the viewer along for an epic journey, while explaining what the race is all about.

Zach Carver directed “Race to Alaska,” which is hilarious in some moments and deadly serious in others. Carver says that duality is true to the competitors and the race itself.

Zach Carver: I mean, it’s an interesting thing, because if you took your time, the Inside Passage is very doable. People have done it in just a basic canoe. But the element of racing makes it much more challenging. And when you remove the motor from the equation, it gets pretty harrowing. There’s huge tidal currents in the area that can run in some places over like 15, 16 miles per hour. There’s places that look like a river, which switches direction, you know, depending on the tide. The cold water, hypothermia, remote areas, hitting rocks, going 24 hours a day. And then, like, if you’re a smaller boat, there’s bears on the shore if you have to camp and whatnot. So there’s a lot to deal with.

Casey Grove: Yeah, I’ll say. There’s a quote from one of the co-founders, who says that the winner is the least interesting thing about the race. What does he mean by that?

Zach Carver: Just watching people get up this waterway is so fascinating. Like, there’s just incredible characters that take it on and a lot of really unique methods to doing it. So if you said, “Oh, I have to drive a mile.” Well, the person that drives a mile in a car — it’s pretty doable. But the person that decides to somersault a mile is much more interesting. And so I think when you see people on, like, a small, small craft, and there’s a stand-up paddle board that does it, there’s people that have made their homemade pedal drives doing it solo, it just starts to be more fascinating. Like, how do you approach this with different limitations?

Casey Grove: Yeah, totally. There’s, it seems like, a lot of humor, in the editing and stuff in the movie and striking that balance between the humor and the real serious aspects of this, where it is like a life or death situation out there, probably, sometimes, how did you strike that balance? Or how did you approach that?

Zach Carver: I mean, I really think it’s authentic to the event and the people that take part in it to create that humor. So much of where we started with that was just the people themselves, the stuff that they self-documented, stuff they chose to point their own cameras at. There’s often a lot of humor involved. And I think that the organizers, too, have a very, like, real gallows humor about them in a really, I think, a positive way. And so we wanted to, I wanted to, imbue the film with all of the same good-natured humor of the people that participate. And I also think it’s related to that kind of adventure — where if you don’t have a good sense of humor, you can’t get through the difficulty.

Casey Grove: I take it that different competitors in the race had cameras with them. And how did you pull off, you know, shooting all this video to make this film with folks, it sounds like, over different years and with different people in different boats. How did that all work?

Zach Carver: It was a lot. I mean, you have your teams spread out over 750 miles of racecourse. And there’s 40-plus teams every year. And there’s only two checkpoints. So there’s only two places you predictably know anyone’s going to be. And so we highly encourage people to film on whatever camera they had, you know, GoPros, cellphones, sometimes fancier cameras. We had a sponsor one year from a company called Intova that was like a GoPro competitor. So we gave everyone an Intova camera one year, which yielded a lot of fun things, because people didn’t expect to have that camera. So I think it made them performative, which was kind of cool. But yeah, in general, it’s the challenge of that, plus also finding opportunities to film context and get out there with drone shots, or aerials, or to document for other boats.

Casey Grove: So for the guy just walking in off the street who’s never really been into boating, for somebody that’s just never heard about this race, and sees the movie poster or whatever, what do you want them to know about it going into it?

Zach Carver: I want them to know it’s gonna be a fun ride. It’s a funnier movie maybe than the poster suggests. I know I had a funny moment. We had our Los Angeles premiere last night. And some friends who hadn’t seen it said there was a really fun moment where in the beginning, they’re watching it going, “Oh my God, I could totally do this. I could be one of these people. I could do this race.” And then about five or 10 minutes later, they see the gravity and seriousness of it and they go, “Oh man, I have a lot to learn. I do not think I can do this race.” Hearing that they were swept up in it and that they — I don’t know, I feel like it’s a movie that you can get swept up in, and there’s just a lot to learn about this, this area, these people, this waterway. I don’t know, that’s not like one takeaway. But I do think that it’s a fun emotional ride that, going through this, this experience really changes everyone that does it. Every racer that’s done this thing finishes with a look on their face of change and accomplishment, and I hope that the film conveys that, that it’s immersive, and you can feel some of that transformational quality. 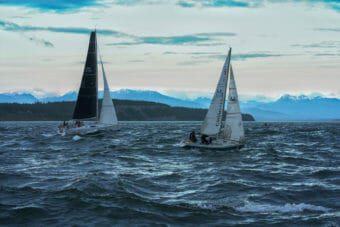 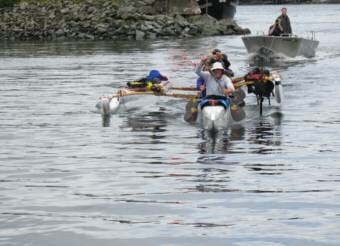 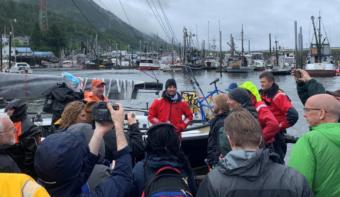 Named after their local Seattle bar, this was Team Angry Beaver’s first time competing in the 750-mile boat race from Port Townsend, Washington, to Ketchikan, Alaska.