It was Don Young’s bear that caught so many visitors by surprise.

On the third floor of the Rayburn Office Building, across the street from the historic Capitol, it was visible from the hallway. People on their way to visit milder members of Congress would stop in their tracks and gawk at the big brown bear pelt. It covers an entire wall in the reception area – nose on the ceiling, hind claws grazing the carpet.

“The bear was kind of like the gateway to the whole Don Young experience,” said Zack Brown, Rep. Young’s last director of communication.

Awestruck visitors, even non-Alaskans, would come in to take photos.

“And then occasionally, when they’re in here, looking at the bear, the congressman will pop out, start talking — these people he doesn’t know — and tell them all these stories about the bear and the other (animal) heads,” Brown said.

Young never tired of challenging visitors with a quiz:

“He’d always ask,” Brown said,”‘Which one of these things on the wall did I not hunt?’”

The choices are endless. In the large room that was the Congressman’s inner office, the walls are crowded with literally dozens of animal trophies. Most have antlers. At least two have tusks. There’s a wolf pelt on one wall and rifles on display behind the desk.

Soon, all the animal heads and 49 years of political memorabilia will be packed up and shipped to Alaska. But for now, the office is still as Young kept it — his alter ego.

On Capitol Hill, the office was part of Young’s brand. The bear, the guns, the heads — it all aided Young’s legislative style and his reputation for fierceness. Or, as some saw it, bullying. Beware of Don Young, new lawmakers were told. He hunts bears for fun.

Young claimed that he cultivated that reputation to defend the state.

“I’m cranky maybe. I’m obnoxious sometimes,” he said in a 2020 interview. “But you have to be a force in the Congress when you’re only one member. And no one steps on Alaska without me letting them know you did something wrong.”

The office is chock-full of other artifacts, too. A totem pole. A hand-carved canoe paddle with formline designs. The walls, wherever there’s a few square inches not covered by an animal part, are coated in framed letters and photos of Young with various presidents.

All that’s been removed from the tableau so far is a pair of leather arm chairs. They were antiques that belonged to the U.S. House and were quickly reclaimed.

Young’s desk is the same, with mementos of his more colorful episodes. An oosik sits on one corner. On the other side is a propeller-topped beanie. Young wore it to a hearing with President Obama’s Interior secretary, to mock their energy plan, which Young thought lacked drilling.

But it’s the animal heads that make the lasting impression. Many are from beasts exotic to Alaska. There’s one that looks like what you’d get if a zebra married an ibex.

Brown has recordings of Young giving a tour of his office. Those will help the staff as they catalog the contents.

It’s up to the Clerk of the House to set the timeline for dismantling the office, Brown said. Meanwhile, the staffers continue their casework, helping Alaskans who’ve hit snags with the federal government. Eventually they’ll decide what to offer to the National Archives, what’s on loan that needs to be returned, and what will be shipped north.

Young always hoped his office would be preserved in replica. That might be a mission for the Don Young Institute for Alaska, the non-profit organized to continue Young’s legacy and promote civic-mindedness. Its president, Curtis Thayer, said it’d be a complicated endeavor, and nothing has been decided yet.

One thing we do know is the answer to Young’s quiz. The one animal Young didn’t kill? It’s the walrus. 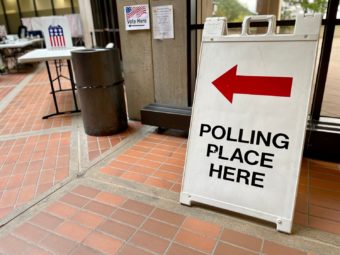 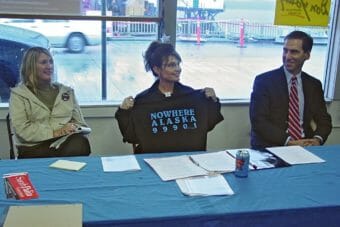 Despite the censure, the party chapter is still recommending that voters rank Palin ahead of the Democratic candidate, Mary Peltola. 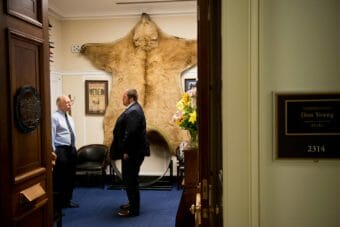 Alaska’s lone US House seat will be vacant until September. What happens in the meantime?

Alaska has had no member in the U.S. House since Rep. Don Young died in March. But the office of Alaska at-large is continuing its work for constituents until Young's successor is elected.