In February, the U.S. Department of the Interior announced the removal of the slur “sq—” from over 660 geographic place names around the country. The agency, which is bypassing state renaming processes, has issued its own list of suggested replacement names. But Washington state officials, noting that the new names are largely colonial, want to gather tribal input and find culturally appropriate names instead.

The renaming decision follows a formal federal declaration in November that the term is derogatory. The process is moving quickly: The February announcement initiated a 60-day window for public input that ends April 25. But what are the new names going to be?

To determine this, Interior conducted a survey of place names near the locations in question, offering them as default replacements. For example, “Sq— Lake” in Skamania County, Washington, is not too far from the Columbia River Gorge, so the first recommended replacement name is “Columbia Lake.” (See the full list of suggested names.) But in Washington, where 18 places will be renamed, state officials aren’t satisfied with these recommendations.

“You pick the five closest names around any given geographic feature and you end up with White, Bonneville, Columbia and Franklin Delano Roosevelt,” said Sara Palmer, chair of the Washington State Committee on Geographic Names. While everyone on the committee acknowledges that the current names are derogatory, Palmer noted that many of the suggested replacements are flawed as well, owing to their colonial origin; finding a suitable replacement isn’t as simple as just removing the slur. Many of the sites involved are areas where Indigenous women gathered food, for example, so the new names ought to honor those women and their histories, Palmer said. “We want to continue to memorialize Indigenous women on the landscapes of Washington state, and the current proposals from the feds will not really do that.”

Therefore the committee is asking both tribes and the public for different ideas. “You could write a name-change application,” said Palmer. “I can’t, while I’m chairing the committee. So we need the public to help us fix this situation.” Interested parties can submit names during an upcoming Board of Natural Resources meeting or by emailing comments to the board.

In Washington, the renaming process usually takes from six to 12 months, during which officials gather public input and get approval from both the state Board of Natural Resources and the Committee on Geographic Names, as well as the federal Board on Geographic Names. The Interior Department’s plan bypasses those state-level channels and goes directly to the federal level. The expedited timeline may force Palmer’s committee to accept imperfect names for now, and work to replace them in the coming months. “We should look at these names as interim,” said committee member Mike Iyall, an elder and former Tribal Councilmember with the Cowlitz Indian Tribe, at the committee’s March 7 meeting. “There is no reason to attempt anything like a rush.”

When HCN asked Interior to comment on the short timeline, a representative replied with a paragraph from the Federal Register notice of the plan, which reads in part: “The Derogatory Geographic Names Task Force (Task Force) created by S.O. 3404 will consider all comments and any proposed additional candidate replacement names received through the Tribal Consultation in developing a single recommended replacement name for each feature.”

Iyall pointed out that different tribes may have conflicting ideas about place names for geographic locations they have in common. Some features might be of interest to a dozen tribes. “Or maybe there will only be one tribe and nobody cares,” he said. “We don’t know that.”

Since the committee can only consider the wishes of tribes that come forward to participate in the process, it is asking for as much input as possible. It has already begun reaching out to tribal officials around the state. Palmer explained that the committee’s place-renaming process has no state-mandated tribal consultation requirement, and it lacks a formal mechanism to hold the committee accountable to tribes. Instead, tribes will be grouped together with the general public, rather than treated as sovereign nations. Still, “we are working toward a more tribal-inclusive process than was necessarily envisioned by the Legislature when they framed that up,” Palmer said. “That’s why we’re doing this outreach, because this is of particular concern to tribes.” The committee, she added, is “very committed to getting tribal input.”

At the federal level, there will be formal government-to-government consultation for the replacement names selected after the public input window ends in April, albeit in very a limited capacity. Interior has planned three two-hour virtual sessions for consultation. If every federally recognized tribe shows up, each tribe will have less than 38 seconds of consultation.

Palmer said the decision to replace Washington’s 18 instances of the slur with names that honor Indigenous women and their histories is a win for everyone. “When we talk about people with respect, and when we tell these bigger stories and these complicated stories, that’s good for everybody,” she said. “It really strengthens everyone. And that’s what I’d like to get us to.”

High Country News is an independent, reader-supported nonprofit media organization that covers the important issues and stories that define the Western United States. 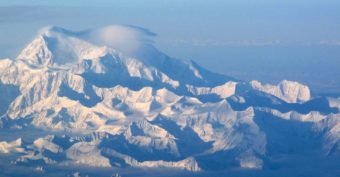 Will Trump follow through on changing Denali’s name back?

President-elect Donald Trump made many a campaign promise during his run for the White House. Shutting down the Environmental Protection Agency and killing the Affordable Care Act were among them.