In the Athabaskan village of Tanana in Interior Alaska, basketball is “a way of life,” said Cynthia Erickson, who owns the local store in the Yukon River village.

But next year, it will all be different.

“There’s not going to be basketball here,” said John Erhart Jr. “This is like a basketball community.”

A junior in high school, Erhart recently played his last game with the Tanana Wolves. The team was ranked number one headed into the boys 1A state tournament championship this month. They ended up losing by four points to the Nelson Islanders, a team with players from Toksook Bay in Western Alaska.

It was the last high school basketball game Tanana will play for a long time. Four of the team’s seven players are graduating seniors this spring. And there isn’t anyone old enough to fill their spots. It will be years before there are enough kids for another team.

“After-school thing, for them to do something that keeps them from doing other things they shouldn’t be doing, is, I think, a positive for all kids,” she said. “And hopefully, you know, maybe they’ll go to a college and continue to play.”

Roughly 200 people live in Tanana, along the edge of the Yukon River, deep in the heart of Alaska’s Interior. It’s had a high school basketball team for more than 40 years. But enrollment has dropped over the decades, and this year the K-12 school has just 30 students. Tanana residents say this is the first time they can remember not having enough high schoolers for a team. After this year’s graduation, they’ll have just two high school players and an upcoming eighth grader.

The loss is felt widely. Arnold Marks grew up playing basketball in Tanana. He moved on to play in college at the University of Alaska Fairbanks. Then he returned to his home village to teach high school.

“I think that, as an Alaskan Native village boy, that we grow up just loving to play basketball,” he said.

You can find the jersey he wore as a Tanana Wolf in a trophy case inside the school. His is the only jersey ever retired in Tanana.

“All our heroes are basketball players,” he said. “All of our parents and older siblings played basketball. And, you know, we don’t have enough equipment for football or baseball or anything else like that. Basketball’s it.”

The same trophy case that holds Marks’ jersey also holds dozens of trophies, plaques and medals marking a long legacy of success dating back to the 1970s. But one trophy that’s missing is the state championship. The Wolves have been the runner-up at least four times. So this season, going all the way seemed more urgent for the team.

“I just hope that they go out and play and enjoy themselves and take in the moment,” Marks said in Tanana, before this year’s state championship. “Because we’ve had great teams in the past that have all come up short. And even though we did, we still like, look back at it fondly and enjoy it.”

The Tanana Wolves also made it to the state championship game last year, but they were a different team in 2021.

“We got blown out by 50, and it was more than embarrassing. It was demoralizing. It felt unfair,” said coach Tanner Winters. “We didn’t know what we were up against.”

This year, he wanted the team to be better prepared, so he stacked the season with more challenging games all over the state. They played at Port Alsworth on Lake Clark. They took a ferry across Prince William Sound to Cordova. They even flew out to Sand Point in the Aleutians.

“And it was the first time, after all the traveling we’ve done,” said Winters, “I’ve seen all the guys just be like, ‘Wow, you know, we’re never going to come here again in our life.’”

Winters, who doubles as a second-year elementary school teacher in Tanana, also created a season that had an educational component for the players.

“That’s kind of another goal of mine. Scheduling all that I did was not just to go play teams that we see again, possibly, but to see Alaska,” he said.

This year, the whole town pulled together to support the team’s travel and to see for themselves a group of boys that rose to the challenge. Fans held fundraisers in Tanana and in Fairbanks to make the season possible. Many also traveled alongside the team to watch the games in person. A treat after two years of the relentless coronavirus pandemic that limited the boys from being able to play and kept everyone out of the stands.

“You could tell when they were little, they always played together and they just built as a team, and the team before them was the same way.” Huntington said. “They build this thing. And that’s one thing about basketball.” Huntington said it brings the kids together as one team, on and off the court.

People in Tanana call the boys the “Magnificent Seven.”

Long after their son had gone to bed on a recent evening in Tanana, parents Christine and John Erhart Sr. stayed up in their kitchen, reminiscing about the kids and basketball as they sipped coffee and pieced a jigsaw puzzle together.

“One night, yeah, I was like ‘where’s my boy?’ And then I went over there and I heard him, you know, playing late one night and I called [the neighbor] and he said, ‘Oh, I got the starting five over here,’ and it was just a joke back then.”

Their hard fought championship game on March 19 came down to the final few minutes, with the Wolves fighting to gain back a small lead they’d established early in the game. But with a foul within the last two minutes, a successful free throw and limited time, the Wolves simply couldn’t top the Nelson Island Islanders. They lost 51-47.

“What’s that four points? If they had one more minute, they could have done it,” said Judy Gau, grandmother to two of the boys on Tanana’s team. Her eyes welled with tears. Her voice was hoarse from days of cheering on the team throughout the state championship. Gau made it clear that while they may have lost the first place trophy, what they didn’t lose was the unwavering support of their community.

“They tried so hard, they dreamed so hard for this,” said Gau, “I am very proud, very very proud. They are the Magnificent Seven.”

After the game, parents, friends and family were already busy planning a celebration in Tanana for the boys and considering how to get another team started in the community.

“It’s hard to even imagine not having basketball, but we’ll still have the little ones. Even though it’s little kids’ games, it’s still fun to watch.” said Christine Erhart.

She said that’s how her son and the other boys on this year’s team got their start.

Correction: An earlier version of this story misstated where players from the Nelson Islanders team are from. They are all from Toksook Bay. 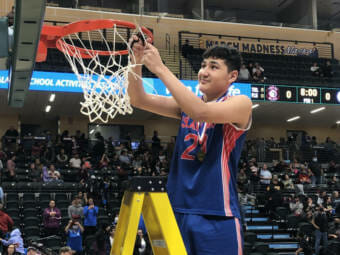 The Islanders used their speed and ball handling to match up against Wolves' size. 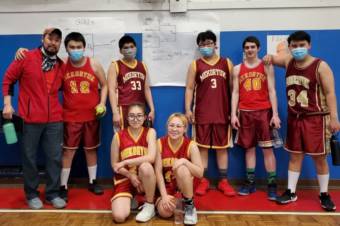 For the first time in nearly 2 decades, Mekoryuk has a high school basketball team

Two girls and five boys play on a co-ed team in a season that has gone quite well. 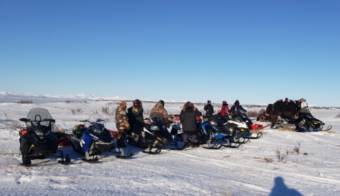 The Sockeye Classic was supposed to be the Togiak Huskies’ first competition since the pandemic began two years ago. And they really wanted to play.