It’s the most comprehensive erosion assessment ever done in the state, and the results are both surprising communities and helping them receive funding to adapt.

On the lower Yukon River, Leo Mahaney leads the village of Nunam Iqua’s environmental department. Before Mahaney saw the state’s erosion forecast for Nunam Iqua, he said that he wasn’t that worried about erosion.

Mahaney said that the erosion was easy to ignore because Nunam Iqua does not have high, cut banks. In other communities that do, it’s noticeable when a chunk of the riverbank falls off into the water. In Nunam Iqua, it can seem like erosion is taking land more gradually.

But according to the state’s assessment, erosion is happening quickly in Nunam Iqua. The study predicts that in the next 40 years, 11 structures in the village will be threatened.

Looking at the state’s study, Mahaney was surprised to see how much land is projected to disappear.

“I had no idea that by 2039 to 2059 it would go that far,” Mahaney said. “Moving houses and all that water line infrastructure. I know it’s not going to be cheap.”

The study roughly estimates that replacing the threatened infrastructure in Nunam Iqua will cost over $4 million over the next 40 years.

Mahaney said that he would share this study with community leaders, who he expects will start taking more action on erosion.

“I think it will start kicking off a long term plan,” Mahaney said.

For many communities, this is their first ever erosion forecast based on scientific data. Other reports that  looked at erosion in the past, like the Denali Commission’s 2019 statewide threat assessment, often relied on a community’s anecdotal record of erosion rates.

But anecdotal evidence of erosion can sometimes be insufficient proof when applying for grants.

“There have been plenty of issues with Alaska Native communities accessing agency resources to work on erosion issues because there was no scientific documentation,” said Jacquelyn Overbeck, manager of the state’s coastal hazards program, which conducted this study.

The Denali Commission recognized this need for Alaskan communities to have a science-based erosion assessment and funded the state coastal hazards program’s study.

Jessica Lewis-Nicori is a tribal council member and a high school science teacher in Chefornak, another village in the Yukon-Kuskokwim Delta. She said that Chefornak used the state’s erosion assessment in a recent grant application to move five homes in the village that are in the most immediate danger due to erosion.

“It’s kind of like, ‘Oh look, the science does support our claim that these houses are falling and the river’s eroding,’” Lewis-Nicori said.

Chefornak received the funding and plans to move those homes by 2023.

One reason why this kind of comprehensive erosion assessment is only coming out now is that new technology just recently made it possible.

The erosion forecasts are created by measuring how much each community’s coastline has moved in the past to predict how much it will move in the future. That’s done by taking aerial images of each community, dating back from the 1950’s to present day. Those images are then mapped on top of each other and combined with data on where the community’s infrastructure is located.

Overbeck, one of the study’s authors, says that takes a lot of computing power.

“In the last five to 10 years has been the development of that technology to do it on a really large scale, which is what we needed for Alaska,” Overbeck said.

There is one key limitation of the state’s erosion assessment. It did not take climate change into account.

Scientists believe that climate change is accelerating erosion in many of Alaska’s coastal communities as sea ice protects shorelines for fewer months of the year. Studies predict that storms will also increase in frequency in Western Alaska.

However, Overbeck said that the state’s erosion study lacked the data to show how much that would affect erosion rates. There were not enough images of communities’ shorelines to calculate any change in erosion rates.

She said that means communities can likely expect more erosion than what these forecasts show.

Overbeck said that the state is involved in efforts to collect aerial images of communities more often, including high-resolution satellite images. That could help answer the question of how much climate change is accelerating erosion. Until then, this study is the best erosion estimate many communities have to help them plan for the future.

But for now, Overbeck said the state’s coastal hazards program is moving on from erosion to look at how much flooding Alaska’s coastal communities can expect to see in the future. 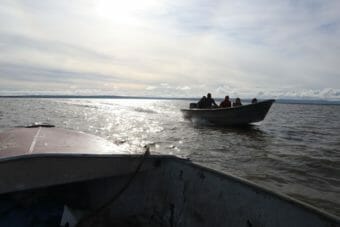