It took weeks for Anchorage resident Latu Tuuholoaki to get in touch with her mother in Tonga after a volcanic eruption and tsunami in mid-January devastated the remote island nation.

Tuuholoaki said she’s only talked to her mom one other time since then. The calls didn’t last long.

Her mom is doing well, but she told Tuuholoaki that she’s been struggling with dirty air and a shortage of drinking water.

It’s been hard for Tuuholoaki to feel so far away from the island community where she was born. But she’s doing what she can from Anchorage, including helping to organize a donation drive as part of the Polynesian Association of Alaska.

Over the past few weeks, they’ve collected thousands of pounds of clothing, food, water and other goods that Tuuholoaki’s mom told her are needed.

On Friday, the Polynesian association — and a network of volunteers from religious groups and nonprofits — started packing up the goods that Tuuholoaki and others helped gather.

They met outside The Church of Jesus Christ of Latter-day Saints in Anchorage’s Roger’s Park neighborhood. The volunteers included a couple dozen missionary youth plus a handful of professional movers. As they passed the heavy boxes of supplies from person to person in an assembly line, some started to sweat from the work.

“I’m gonna have some nice sleep tonight,” said one volunteer in between breaths.

The boxes were stacked onto pallets sitting in the snowy parking lot. A forklift then raised them into two cargo containers waiting nearby.

Matson shipping donated transportation costs for three truckloads of about 40,000 pounds each.

Aside from donations of clothes and water filters, the Polynesian association also used $3,500 in cash donations to buy pallets’ worth of dried goods, like sugar, rice and cooking supplies. Plus, the association bought packets of seeds so people in Tonga can plant watermelon, corn, cabbage and other crops in their gardens that were flooded by tsunami waves triggered by the volcanic eruption.

“Within weeks it will grow because of the volcanic soil, it’s gonna grow those really good,” said Lucy Hansen, president of the Polynesian association. “The volcano — it ruined a lot of their farms.”

The hundreds of boxes of supplies will be trucked to the port and loaded onto cargo ships. From Anchorage, they’ll go to Unalaska, then Shanghai and then Tonga.

“Our goal is to get it there as quickly and as efficiently as possible,” said Dylan Faber, a spokesperson for Matson. “It can take a couple of weeks just with the logistics and the scheduling of the ships.”

Before the volunteers started packing up the supplies on Friday, there was a dedication ceremony to honor the organizations who helped coordinate the effort and who donated. Anchorage Mayor Dave Bronson and representatives from the governor’s office attended. Women in floral skirts and men in sandals expressed their gratitude for the donations that came in from as far away as Utqiagvik. They thanked God with prayers and song.

“I am out of words to explain to you how I feel today — the love, the kindness of everybody,” Hansen said after the event.

With communication to the island still spotty, some Alaska-based Tongans say their families don’t know about the donations coming in from Anchorage. But, for people like Fehoko Pulu, who has siblings there, it’s a comfort to know that so many people in his hometown care about an island thousands of miles away.

“When you see the truck pull in my heart is, you know — it’s full of love and gratitude to the people for their donation,” he said. “And I know people back home will benefit from it.”

He said he’s just praying that it gets there soon. 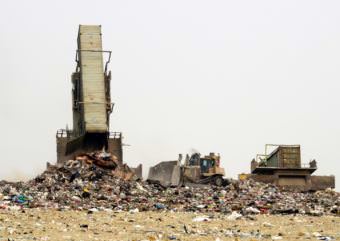 When you toss a candy wrapper in the trash in five Southeast Alaska communities, you’re sending it on a thousand-mile journey to a Lower 48 landfill.