Sen. Lisa Murkowski and Alaska Congressman Don Young have asserted that the attack on the Capitol was wrong, a day after their party declared that House January 6 committee is engaged in “persecution … of legitimate political discourse.”

What happened on January 6, 2021 was an effort to overturn a lawful election resulting in violence and destruction at the Capitol. We must not legitimize those actions which resulted in loss of life and we must learn from that horrible event so history does not repeat itself.

I will reiterate what I said last year: I was appalled at the violence and destruction at the Capitol on January 6th. What transpired was criminal, un-American, and cannot be considered legitimate protest.

They did not respond to emailed inquiries Friday about the statement from the Republican National Committee, nor did Sen. Dan Sullivan. But Murkowski and Young issued statements Saturday afternoon.

The party on Friday censured only two Republicans on the Jan. 6 committee — Reps. Liz Cheney and Adam Kinzinger. The censure said the two were persecuting “ordinary citizens” who were engaged in “legitimate political discourse.”

Murkowski’s response condemned not just the criminal acts that occurred at the Capitol but also the reason the rioters went there:

“What happened on January 6, 2021 was an effort to overturn a lawful election resulting in violence and destruction at the Capitol,” she said in a statement sent to reporters and posted on her social media channels. 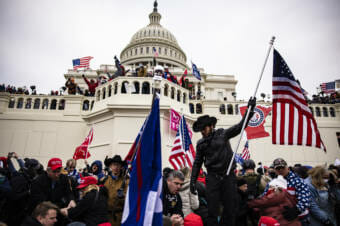 One year after the Jan. 6 insurrection, signs of a nation deeper in peril

Surveys indicate rising alarm over a democracy in crisis, the birth of a mass movement sympathetic to insurrection and growing support for political violence.

Murkowski is only the second Senate Republican to back the bill, after Sen. Mitt Romney of Utah.