One year ago, a mob of pro-Trump insurrectionists violently stormed the U.S. Capitol while lawmakers gathered to certify Joe Biden’s Electoral College victory.

On the other side of the country, Jeffrey Meyers was gearing up for the first day of the semester at Kenai Peninsula College. Meyers is an assistant professor of history and political science at KPC’s Homer campus.

When we talked to him on Jan. 6, 2021, Meyers said he was just starting to think about how to make sense of that day and contextualize it in his American history courses. Thursday, on the anniversary of the riot, he said it’s something he has thought a lot about in the year since.

Jeffrey Meyers: I watched quite a bit this morning, and I’ve been watching for the last year and reading and listening to people who were there — senators, congressmen, congresswomen. Why it happened, and we’re going to know more and more as things go on.

Sabine Poux: When we spoke last year, we were talking about how an educator goes about teaching current events like what happened last Jan. 6 as they’re happening when the political climate is so volatile.

It’s been a year. How have you incorporated Jan. 6 into your curriculum?

Jeffrey Meyers: It was good timing for me in the sense that KPC taught a Civil War class starting in January. So students from around Alaska were able to take an American Civil War class through me.

And one of the first things that we did in class is we showed a picture of the gentleman who was running through the Capitol on Jan. 6 holding the Confederate flag.

And I’m sure a lot of people are familiar with that photo. And so we basically started the American Civil War class asking students from Alaska, you know, “What does this photo mean to you?” Or, “What do you see here?”

And there was about 15 or 16 students, and we were all on Zoom because of COVID. And I got everything from, “He’s breaking the law,” and that the Confederate flag is a sign of states that seceded from the Union illegally to “Well, actually, that’s just a symbol of states’ rights and it’s cultural, and there’s nothing too wrong with the flag itself.”

It was interesting that through these 15 or 16 students, you could see that even when you’re looking at the same photo at the same time discussing it, images and ideas and events mean different things to different people. So it has been fairly difficult in this time period to teach things like Jan. 6.

Sabine Poux: Where do you go from there as a professor? Like as an educator, how do you carry on that conversation?

Jeffrey Meyers: Well, that day it went on — “OK, that’s great. Now, let’s learn about what the flag is.”

And then so for the next four months, we discussed the reasons for the Civil War, what it meant to the country, why it occurred, could it have been stopped — things like that.

And so we went through some of the reasons why a human, a person, an American would be flying the Confederate flag through the Capitol. And so from that day forward, we tried to explain that photo a little better with historical outlooks.

Sabine Poux: You went to a Jan. 6 remembrance today. Can you talk about that?

Jeffrey Meyers: Sure. It was put on by the Homer Unitarian Universalists and it was a vigil. And it was a discussion of and a remembrance of what happened to year ago. And just kind of how we got here and what we can do to help heal and kind of move our democracy forward so that we don’t lose it.

And so my role in this was they asked me to give a speech. And I gave a short six, seven-minute — because it was like eight degrees outside — discussion on the historical comparisons between the time that Abraham Lincoln was first elected to his inauguration, which was from November to March, and kind of the similarities between when Joe Biden was elected to his inauguration.

And I kind of went through some of the similarities, in the sense that we have been through this before and we got out of it. And one of the things that Abraham Lincoln said at his inauguration was essentially that we’re friends, we’re not enemies. You know, we must not be enemies. And even though passions have strained us we have to come together. 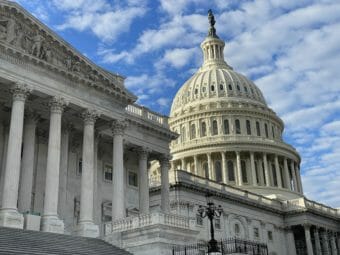