Alaska Commissioner of Environment Conservation Jason Brune said the corporations weren’t aware of the pollution when they selected the lands as part of the Alaska Native Claims Settlement Act.

“The village corporations (and) the regional corporations were promised lands as a direct offshoot of the 1971 ANCSA law and they didn’t expect to get damaged goods,” Brune said.

Much of the contamination is on former military installations and dates back to the Cold War or World War II. Sites include a chemical weapons dump in Adak as well as old tank farms all over Alaska and abandoned buildings that contain lead and asbestos.

There are 548 sites, and the state filed 548 notices of intent to sue in mid-December.

“We want the sites cleaned up,” Brune said. “That is our ultimate goal here.”

Brune said he pursued the matter with the Trump administration also but didn’t get results.

“Despite the federal government’s own reports on this contamination and our repeated requests for something to be done, it has been 50 years of inaction,” ANCSA Regional Association President Kim Reitmeier said, in a written statement issued by DEC.

A spokeswoman for the Bureau of Land Management said the BLM can’t comment on pending litigation. 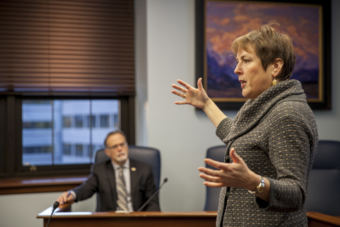 The abrupt firing of Permanent Fund Corporation Director Angela Rodell in December surprised and concerned many Alaskans, including some lawmakers.

Dunleavy said in June that it didn’t make sense for legislators to receive the money until they’ve resolved the future of permanent fund dividends.