Skagway officials have filed a legal challenge against the state redistricting board claiming that it didn’t follow state constitutional guidelines when it put the borough in a House district with Juneau’s Mendenhall Valley. Skagway takes issue with upper Lynn Canal communities being detached from their current house district that includes downtown Juneau, Douglas Island and the community of Gustavus.

According to Cremata, Skagway has far more in common with downtown Juneau than the Mendenhall Valley.

“Not only do we have, you know, an economy based on cruise ships, just like downtown Juneau, but we’re also linked historically with downtown Juneau. A lot of the buildings were built during the Gold Rush, and you know, historical buildings and our histories are shared. We don’t have any of that with the valley,” Cremata said.

In October, Skagway’s assembly sent a letter to the redistricting board asking for a town hall meeting so that the concerns of residents could be heard. The board didn’t come to Skagway but set up a Zoom meeting online. Skagway Assemblymember Deb Potter was on that video call.

“Every single person basically said the same thing agreed with you know, we have a socio-economic common interests with downtown Juneau, only one person spoke in favor of grouping us with the valley and Auke Bay,” said Potter.

But when she went to look on the redistricting website for the minutes of that meeting, she said that after hours of searching, she couldn’t find any mention of those concerns.

“I could not find one single bit of evidence that Skagway even ever gave testimony,” Potter said.

Under the direction of the borough manager, municipal staff and municipal lawyers of Brena Bell & Walker crafted a lawsuit alleging multiple violations of redistricting code.

Filed last Friday, the 10-page legal complaint alleges the map chosen by the board was never made available for public review or comment. It also calls the redistricting board’s decision to change Skagway’s district arbitrary and irrational.

It goes on to list several common interests between Skagway and downtown Juneau that aren’t shared by Mendenhall Valley and Auke Bay.

Skagway is not alone in its legal challenge of the redistricting board’s final map. The city of Valdez, the Matanuska-Susitna Borough, and individual plaintiffs in Anchorage are challenging the new maps in court. Historically, legal challenges to redistricting maps are commonplace.

The redistricting board will hold a meeting on Dec. 15, with legal challenges being addressed in a closed executive session. 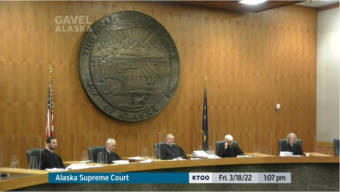 The appeals centered on whether Anchorage's South Muldoon neighborhood should be paired with Eagle River in a Senate district, Skagway should be in a House district with downtown Juneau or the Mendenhall Valley, and Valdez and part of Mat-Su should share a House district. 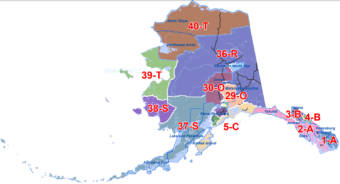 Each lawsuit argues that communities were wrongly placed in the same district with other communities they have little in common with.