Anchorage Mayor Dave Bronson’s administration has seen a half dozen or so resignations or firings over the past several weeks among officials working on the city’s response to homelessness.

That comes at a time when temperatures have dropped below zero degrees in some parts of town and advocates have raised concerns about overcrowding in the city’s largest shelter at the Sullivan Arena.

This transcript has been edited for clarity and additional information has been added.

Casey Grove: Remind us where we’re at with the city’s response to homelessness right now?

Lex Treinen: The city has a big housing shortage right now, and during the pandemic, a lot of energy has been focused on making sure people have a roof over their heads. The Sullivan Arena, the massive emergency shelter in Midtown, has been sleeping hundreds of people each night since the pandemic began. That’s still sort of the center of the city’s efforts right now, even as it works on a plan to move people out of the shelter.

Casey Grove: How have things been going at the Sullivan? Have there been any big changes under the new operator?

Lex Treinen: From what I can tell, none of the changes have been giant. In general people say there’s less of a militaristic feel under the new operator — that’s the private company 99 Plus 1. Staff there say they’re going for a more humane approach and treating people like adults.

Not everyone thinks that’s a good thing, I’ve heard complaints from clients who say they feel less secure because of lax rules and fewer security guards.

But it’s been really hard to get information about what is happening. Part of that is the sheer number of people working on homelessness leaving, which has disrupted the normal flow of information.

There are also policy changes that have made getting information more difficult. Reporters aren’t allowed to talk to clients inside the shelter any more. It’s been harder to arrange tours of the arena, and managers were banned from speaking to reporters without permission.

Casey Grove: Should we be concerned about the conditions in the Sullivan?

Lex Treinen: I have been able to talk to a few officials and guests of the shelter, and they say while things aren’t great, they’re adequate. Recent cold weather has pushed the shelter to over capacity, so the sheer number of people in there is a challenge. A couple days in the last week there were over 500 people sleeping there, and the shelter was set up for a maximum of 420. They’re not turning people away though, especially in this cold weather.

The operator said it’s hiring more staff and working on tightening staff training requirements. They’re also trying to get the toilets operational again — the entire population there has been relying on Porta Potties for a couple of months now. Clients say it hasn’t been great, as you can imagine.

There are some things going on outside the shelter that have raised some eyebrows.

Lex Treinen: Just yesterday workers set up a chain link fence around part of the perimeter of the Sullivan. Shelter operators told me they weren’t told that it was going up, though a city spokesperson said the operator was told. A spokesperson wrote in an email that clients and neighbors requested the fence for security.

There was also a warming tent that finally went up earlier this week, but so far it doesn’t have a heater or a floor. An official said it should be ready to use by Friday so that people who come in after curfew, or those who don’t want to be in the Sullivan, have a place to go. Some sources told me the tent was supposed to go up a month ago, and it’s not clear why there was such a big delay.

The Sullivan has still been letting people inside, even though they’re already over capacity. But advocates told me they’re worried that campers might stay outside if they don’t know they’re allowed into the building after curfew. A spokesperson said that it’s working with providers to let homeless people know that they’re welcome in the Sullivan.

Casey Grove: Who’s supposed to be in charge of this? It seems like there’s a communication breakdown going on in the city?

Lex Treinen: I think the recent staff losses are really a big piece of this story. There’s been about a half dozen city officials involved with homelessness who’ve been fired or stepped down recently. Several told me they left after raising concerns about what’s going on with homelessness. All the job vacancies make it really hard to know where to direct questions.

Yesterday, we learned of a new hire who’s set to take charge of the city’s response to homelessness, so hopefully that will clear up some of the communication issues.

There’s also still a working group made up of Assembly members and administration officials working out a way to move people out of the Sullivan into smaller shelters, but the recent resignations have slowed those talks down. Assembly members on the group say they’re still making progress, but they also have to rebuild trust with the new members. All that just slows down the city’s progress towards its goal of getting people out of shelters and into housing.

Lex Treinen: His name is Dave D’Amato. He’s worked at a few housing nonprofits over the past decade, like United Way and the Anchorage Coalition to End Homelessness. Robert McNeily, a spokesperson for the health department, said D’Amato will lead a new division focused on housing and homelessness that will be created next year.

A few people in that nonprofit world said they have concerns about D’Amato’s views on homelessness. D’Amato and the city declined an interview request, but he testified to the Assembly last year against a plan that is really similar to one that the administration and the Assembly have tentatively agreed to. That plan is to move people out of the Sullivan Arena into smaller shelters dispersed around town. So far Assembly members working on that plan say they’re withholding judgement about D’Amato, but I think it’s something to watch in the coming weeks. 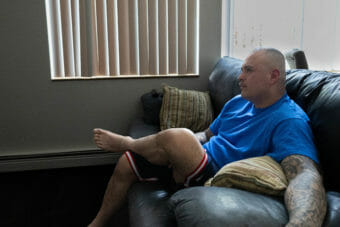 Housing is one of the biggest challenges for people who were involved in the justice system. Case manager Nathan Block says solving that takes effort not just from those people, but from the community, too. 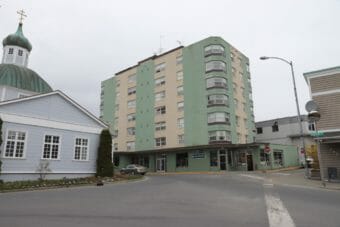 Tenants are frustrated with the situation, but it’s not necessarily illegal for a multi-story apartment complex to go without a working elevator.