A new airline that’s announced regular flights between Unalaska and Anchorage has delayed its start of service to the island until next spring, saying it’s studying safety recommendations made in the wake of 2019’s fatal crash at Dutch Harbor involving the same type of aircraft.

This summer, Aleutian Airways had said it would fly nonstop between Alaska’s largest city and Unalaska as early as the fall.

Aleutian Airways co-owner Kent Craford said the new carrier won’t be flying to and from Unalaska until next March. That’s to give the carrier time to study the National Transportation Safety Board’s recommendations stemming from the PenAir crash involving a Saab 2000 at Tom Madsen Airport that killed one person in October 2019.

“We’ve decided that, proactively, we’re going to be putting in place some additional safety mitigations just to further improve our operating margins in Unalaska,” Craford said.

The NTSB blamed the fatal crash on a mix of faulty wiring, lax oversight by aviation regulators and inexperienced crew.

Even though Aleutian Airways plans to fly the same model of turboprop aircraft, Craford said he’s confident it can be done safely.

“There’s processes that take place in the pilots’ decision making that we just want to take a look at and further tighten up,” he said. “There’s decisions about where on the runway to land — the ‘go, no go decision points,’ as they say.”

Currently nonstop air service is offered between Unalaska and Anchorage by Ravn Alaska. There are also charter flights.

But the delay in adding a second scheduled carrier to connect the community has worried city leaders. At a City Council meeting on Nov. 9, Unalaska Vice Mayor Dennis Robinson expressed concern that limited options could impact the community, as the island’s commercial fishing industry prepares for Pacific cod and pollock season.

“It’s going to create a bottleneck in this community,” Robinson said.

Aleutian Airways will begin offering services on other routes. Craford says the new airline plans to roll out charters in Southwest Alaska that would connect Cold Bay and Sand Point with Anchorage in the coming weeks. 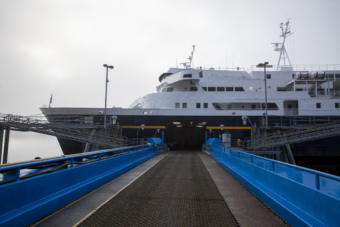 The Matanuska was supposed to return to service in late December, but state officials now say they’re not sure when it’ll be ready. 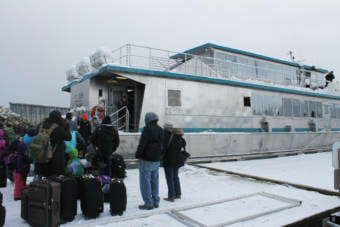