The number of Americans with eating disorders has skyrocketed during the pandemic. Alaska does not have enough resources to help them.

Jasmine Taylor-Bryant says it should have been a red flag when her daughter Willow lost 6 pounds between routine yearly check-ups. It was a stressful winter between the pandemic and a landslide in Haines, where they live.

But when Willow had skipped a period by March, her mother knew something was wrong.

“I was like, ‘No you’ve lost weight. I can see something’s going on. Everything around food is stressful. We need to go to the doctor.’” Taylor-Bryant said.

She says it took a long time to get an eating disorder diagnosis. It was obvious her daughter was losing too much weight, but the local clinic wanted to run tests and make sure something else wasn’t behind Willow’s weight loss.

Taylor-Bryant says things got out of control fast. By May, Willow was losing a pound or two a week.

There are no treatment centers for eating disorders in Alaska. And for families like theirs, who rely on Medicaid, there is only one option for treatment. It’s several thousand miles away in Utah, and the waitlist is 12 weeks long.

Taylor-Bryant found another clinic with space for Willow, also roughly 3,000 miles away. She declined to share where exactly it is for privacy reasons; Willow is still in treatment there.

The family is paying out of pocket. Taylor-Bryant says it costs up to $1,800 a day, upfront. She estimates the total bill by the time Willow is released in January will be more than $200,000.

The state’s Medicaid mental health office didn’t respond to repeated requests for comment by the time this story published, so it is unclear why there is only one treatment option for those insured by Medicaid.

Taylor-Bryant moved into the room above her parent’s garage so she could rent her place. Willow’s grandmother mortgaged her home. The Haines community, family and friends have donated tens of thousands of dollars to save Willow’s life.

Grace Ray Schumacher is the only dietician in the state certified to work with eating disorders.

“Alaska had a significant eating disorders issue that was never being treated or not treated in the state as well,” she said.

Schumacher noticed that she was seeing a lot of patients with eating disorders when she began work as a dietician in Palmer. She says she didn’t feel qualified to assess them, so she went back to school for a special credential.

“We need qualified clinicians. That way, at least allow us to do better for an outpatient level of care,” she said.

Cases began to ramp up during the pandemic. Schumacher says Alaska’s medical facilities aren’t set up to handle the volume or the severity.

“It was pretty scary. And as a clinician dealing with the liability of having patients in my care who are not necessarily supposed to be cared for at this level of care, it’s intimidating,” she said.

Schumacher works with out-of-state clinics to get people into the care they need. But she says lately, wait times can be really long.

Pam Kidd, the admissions director for the Medicaid-friendly treatment facility Centers for Change in Orem, Utah, said in her 21 years there, she’s never seen waitlists like this. Since the pandemic, she said, it’s been unrelenting.

Some clinics only accept certain populations. Centers for Change only works with female-identifying patients over the age of 13, for example. That leaves a lot of people out.

Keegan Carroll says doctors in her community didn’t really know how to respond when her son got sick two years ago. He was eventually diagnosed with an eating disorder at the age of 10.

Despite their prevalence, Keegan Carroll says eating disorders are commonly misunderstood — and that makes them harder to diagnose.

“There’s a misconception of eating disorders, you know, that the individual just doesn’t eat … and they eat. They do eat. They just don’t eat enough,” she said. “Because we were here in Juneau, there were no resources to help us navigate.”

Her son’s illness progressed quickly. After three months of bouncing around, the family found Schumacher, who ran blood tests. Carroll says her son’s heart rate dipped into the 30s, a sign that the body is starving.

Within days, the family traveled to Seattle Children’s Hospital, where their son could be hospitalized. It was there that they finally got an anorexia diagnosis.

“I literally just broke down. And that was probably the hardest moment of my life,” she said.

“I think because of the uncertainty of what was gonna happen, and how we were going to treat this? And as a family, what was gonna be our future? What was going to be his future?”

There was nowhere to continue his care in Juneau; no one specialized in teaching his body to receive food again. Carroll quit her job and her husband took time off from work to treat their son at home.

She has turned to advocacy in the wake of her son’s illness. She joined the committee of a fledgling nonprofit and is pushing for awareness.

A push for change

Beth Rose began that nonprofit, Alaska Eating Disorders Alliance,  two years ago with her friend Jenny Lauden. Both women recovered from eating disorders in their teens and then navigated care with their children.

“The needs of families who are reaching out to try to get help has increased dramatically,” Rose said.

“We’ve been hearing more and more from parents about their teenagers, even their adult children needing help.”

There aren’t many statistics to point to. The Centers for Disease Control and Prevention stopped formally tracking eating disorders in 2015, even though nearly 10% of the population will experience an eating disorder in their lifetime.

Rose says the stakes couldn’t be higher: more people die with eating disorders than any psychiatric illness other than opioid addiction.

“There’s so much shame and stigma around eating disorders, that we thought we don’t want to have anybody else walk that journey alone. And we need to kind of bring this out in the open,” said Rose.

The National Eating Disorder Association runs a hotline for calls, texts and chats for people in need. Elizabet Altunkara runs operations for the helpline. She says the volume of interactions went up 56% during the pandemic — specifically, from June 2020 to July 2021 over June 2019 to July 2020.

Back in Haines, Taylor-Bryant says her daughter is making progress — she’s gained back 30 pounds. On a recent video call, some of Willow’s new friends passed in the hall.

“I could hear his kids going, like, ‘Hi, Willow’s mom!’ It just reminded me, like, I know that they’re all just a bunch of kids, but it was like, ‘Oh my God, they’re just normal kids that are all scared. And also far away from home.’” Taylor-Bryant said.

Local advocates want to bring care like this closer, and make it easier to find help at all. 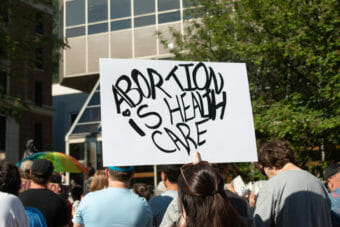 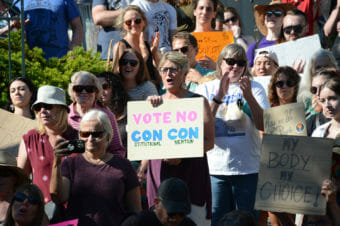 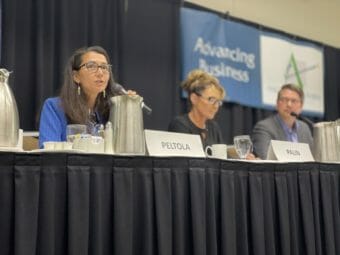 To US House candidates Begich and Palin, abortion is a state issue. Peltola says the decision is personal.

Democrat Mary Peltola is the only candidate left on the special election ballot who says the law should protect an individual’s right to choose abortion.