Alaska Day is a state holiday recognizing the transfer of Alaska from Russia to the United States. A central event that caps off Sitka’s Alaska Day Festival celebrations most years is a reenactment of that transfer at the top of Castle Hill, or Noow Tlein.

For many, the Alaska Day celebrations and the transfer ceremony atop the hill commemorate the sale of stolen land from one colonial power to another and erase the violent history of colonialism in Sitka.

Noow Tlein was once the site of Lingít Kiks.ádi clan houses, which were later taken by the Russians and destroyed. In recent years, a movement to recognize Reconciliation Day in place of Alaska Day continues to gain steam.

On Sunday, a group of around 100 Sitkans led by Kiks.ádi clan members, gathered atop Noow Tlein to recognize Reconciliation Day. While the gathering emphasized celebration, the group did sing one mourning song.

On Monday, amid Alaska Day celebrations, a group of demonstrators organized by local activists and tribal citizen Louise Brady marched from Gaja Heen or Old Sitka to Noow Tlein.

The march was in commemoration of the “survival march” the Lingít people made across the island following the Battle of Sitka and their expulsion by the Russians from their ancestral home.

The group marched to the top of the hill in protest of the transfer ceremony reenactment holding signs about Reconciliation Day, while Brady lightly drummed. Brady says she hopes to see more respectful conversation about reconciliation in the future. 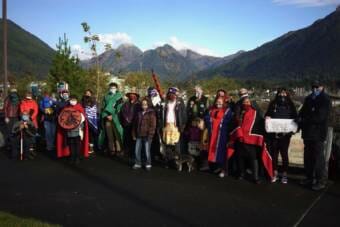 Since 2017, a growing group of Sitkans has held a mourning ceremony on Alaska Day at the bottom of Castle Hill while the transfer ceremony takes place at the top.