The 62-foot sailboat She-Ra visited Haines harbor over the weekend. It was the boat with an Alaskan malamute face printed on the bow. Captain Lars Zika is sailing around the world with his dog, and meeting friends along the way.

Zika says there wasn’t really a plan when he set sail in Bangkok, Thailand in June. He was solo, on the water, heading east.

“The best time to cross from Japan — cross the North Pacific or Bering Sea or whatever towards the Vancouver and Alaska area — would be July, August,” he said. “But coming up to Japan is the cyclone season there, so you’ve got to go through some s— to have a good blow across the north.”

Zika’s not entirely alone. He’s accompanied by his seven year old Alaskan malamute, She-Ra. Yes, the boat is named after the dog.

“Seven generations ago, she was my lead dog on the sled in Juneau, when I lived on a farm for a bit there,” Zika said.

Zika is originally from Switzerland. He worked as a chef and owned several restaurants throughout Southeast Asia. He took up sailing two years ago while living in Bangkok.

“I don’t like people, so I went sailing,” he said.

Zika bought his 62-foot sailing yacht in 2018 and started racing.

“Did a lot of races with it, and we always did really, really good,” he said. “And she (the boat) is a beast.”

The dog She-Ra’s image is emblazoned across the yacht’s sail and bow.

“All the time, wherever I go, she’s always with me,” Zika said. “It’s fun. The boat gets known, and then wherever you arrive, somebody knows it.”

This summer, alone with his dog in the South China Sea, his auto-pilot system broke and he crossed 3500 nautical miles of storms, at one point staying up for 72 hours straight.

“I got into really, really bad weather for a very long time,” Zika said. “And naturally, because you can’t do multiple things at once when you’re alone, you can’t let go of the wheel for five seconds if the waves are big.”

In South Korea, he towed a broken-down Russian vessel and was welcomed to the port of Vladivostok, Russia, where he fixed up his boat and even competed in a three-day regatta.

“​​They were super nice,” Zika said. “They fixed the boat, everything, they were they were just amazing. I mean it was king crab and caviar every day.”

He crossed the Bering Sea alone, and a friend joined him in Kodiak. Then they visited Seldovia, Homer and Seward. They sailed the Gulf of Alaska together in six days.

But the real challenge was crossing through the Dixon Entrance into the Inside Passage.

“Then we had, really, Alaska’s angry,” he said. “And it started gusting fifties at us from the north, massive seas, so we spent 24 hours doing a f—— circle.”

Zika and friends are now sailing the Inside Passage.

“I mean, having orcas 360 degrees around the bow just joining you on your little journey for a few hours. That’s pretty ridiculous,” he said smiling. “And drinking champagne in front of a glacier by cracking through surface ice is also quite nice.”

They sailed up the Lynn Canal, making stops in Skagway and Haines.

“Even coming up here we just had some orcas pop out and play and leap, just from Skagway to here,” he said. “We had three up here and She-Ra gets all excited. She thinks he’s one of them because they share the same skin color.”

They spent the weekend in Haines, hiking Mt. Riley, visiting the Port Chilkoot Distillery and took a group of new friends sailing on Sunday. Though winds were light it was a rare blue sky sunny day.

On Monday, he set sail down the Inside Passage, headed for Vancouver. But from there, it’s open.

“A few weeks ago I figured out it’d be a great idea to do the North America circumnavigation, like the continent itself,” he said.

So if you see the She-Ra — its the one with a Malamute face across the sail — say hello. You can also follow their journey online here. 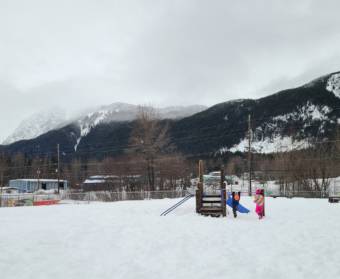 A landscape architecture firm in Juneau volunteered to create a design for the playground.